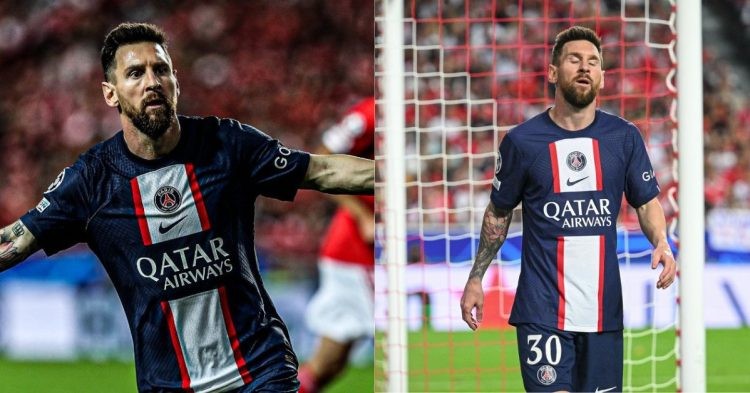 Lionel Messi is set to miss out the Ligue 1 clash against Reims on Saturday. Messi will not travel to Reims with the team, as he is suffering from some discomfort in his calf, Galtier confirmed.

The Argentine opened the scoring in a compelling fashion as PSG drew 1-1 at Benfica on Wednesday. Messi became the first player in Champions League history to score against 40 different teams.

🚨 Lionel Messi’s goal for PSG vs. Benfica has been named as the Champions League Goal of the Week. 🇦🇷pic.twitter.com/x0JqeEllg0

Messi has been involved in seven goals in last five Ligue 1 matches, two goals and five assists. The medical update issued by the club elucidated, Messi would miss the game against Reims on Saturday, he will go through “reassuring examinations” on a calf injury.

“There will be changes,” Galtier subsequently told Friday’s pre-match news conference. “He asked to be replaced during the Champions League game (against Benfica on Wednesday). He has a little problem with his calf but he will be back to training on Sunday,” Galtier told a news conference on Friday.

Lionel Messi will miss PSG’s game against Reims on Saturday 🤕

“Leo Messi will not be fit for Reims but will resume training on Sunday morning. Kylian Mbappe has angina but will be travelling to Reims.”

Meanwhile, Galtier praised Gianluigi Donnarumma for his response to criticism of his early season performances, after the Italy goalkeeper made six saves at Benfica.

“He works well, nobody is airtight against remarks – sometimes it becomes criticism and nobody is insensitive,” Galtier said.

“I always pointed out his few little mistakes, whether it was a lack of concentration or other issues. He was told after Benfica that he must continue too always be efficient.” Galtier concluded.

PSG look to march on without Lionel Messi

As, Lionel Messi is set to miss the game against Reims, he is expected to be back in the return leg at Paris against Benfica. Messi is rested as PSG look to build advantage at the top of Ligue 1 table.

Without Messi, probably the Spaniard Pablo Sarabia will start ahead of Hugo Ekitike on Saturday. If, PSG win on Saturday they will have 28 points in their first 10 matches of the Ligue 1 campaign.

Imagine if Lionel Messi goes out winning it 🥺 pic.twitter.com/pWYRDSZyft

With the World Cup just weeks away, Lionel Messi will look to stay fit and healthy. The most important thing for him right now is the World Cup with Argentina. As he said in an interview, this will be his last World Cup. The Argentine will look to Capitalize on his last opportunity to claim the biggest accolade of winning the World Cup.

Argentina will look upon the service of their talisman as they face the competition of Poland, Saudi Arabia and Mexico in matches of Group C in Qatar.