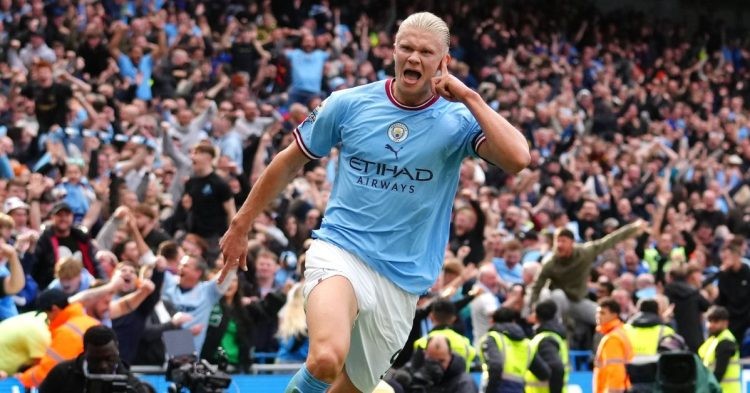 Manchester City forward Erling Haaland is continuing to break records left, right and centre for Pep Guardiola’s side. The Norwegian has settled comfortably and is set to rip apart the records of Premier League.

Erling Haaland not a classic ‘pep style player’ which hints us towards a massive tactical flexibility and change in strategy. A different approach to play as the Catalan not being a assertive coach to play with a single specific way.

Pep’s distaste of no 9 has always been a huge controversial debate for the pundits as some say it’s illogical. Meanwhile, the others praise the unique approach to the game introduced by the Catalan.

Haaland is on track to break every goal scoring record before him if he keeps finding the back of the net with anything like his current frequency. He has already scored 14 goals in just eight games so far this season.

Those of us who lived through the past two decades of Lionel Messi and Cristiano Ronaldo having their own personal G.O.A.T battle might have believed they would never see another player who could live up to the ridiculously high individual standards set by the two living legends.

Here are some of the ridiculous stats already…

• Arsenal, Spurs, Liverpool, Brentford and the rest of Manchester City are the only Premier League teams currently outscoring Haaland. He trails the combined efforts of his team-mates 15-14. Fourth-placed Brighton have matched his 14 goals.

Haaland's stats if his goalscoring continues at it's current rate…😳🔥 pic.twitter.com/4jsMhPUd0V

• Those goals are currently coming along at a rate of one every 47 minutes. If he were to continue that rate he would end the season with 71 Premier League goals.

• Haaland is the first player in the Premier League to score hat-tricks in three successive home games, and the first Manchester City player to score a Manchester derby hat-trick since 1970.

• Haaland is unsurprisingly the quickest player ever to reach three Premier League hat-tricks after getting there in eight games. The previous record holder was Michael Owen, who managed it in a sluggish 48 games. Next best are Ruud van Nistelrooy, who took 59 games, Fernando Torres (64) and Andy Cole (65).

How does Erling Haaland & his goal-scoring rate compare to Ronaldo and Messi?

Haaland burst on to the scene when he signed for Molde in his native Norway at the age of 16 then, as a 17 year old. He netted ten goals – twice the total Ronaldo bagged at the same age with the then Sporting CP teenager hitting five. Meanwhile, Messi got just one as he found his footing in the Barcelona first team.

As a 20-year old, Haaland scored a stunning 40 goals. Meanwhile, that absolutely smashed the 19 Messi scored at the same age and the 17 from Ronaldo. Then, as a 21-year old the Norwegian netted 42 goals compared to Messi’s 41 and Ronaldo’s 26.

Haaland celebrated his 22nd birthday in July and has already scored 18 goals in all competitions since then, which once again puts him on course to beat the 40 that Ronaldo netted at the same age while the 48 scored by Messi remains a more than achievable goal.

This obscene stat has already created a sense of speculation as his goal-scoring mentality might help him reach the heights of the two acclaimed GOAT’s of this beautiful game of Football.