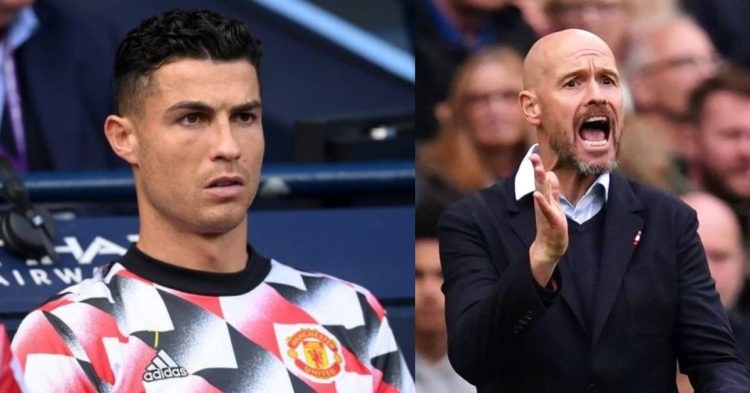 A lot of speculation has surrounded Cristiano Ronaldo over the past few months. This can be attributed to his poor form and Erik ten Hag refusing to give him a start. Yesterday’s 6-3 thrashing in the Manchester Derby saw Ronaldo as an unused substitute once again.

Transfer expert Fabrizio Romano provided an update on the Portuguese’s future in an interview with The United Stand.

Romano said Cristiano is not happy with his current situation, as any player would be after a devastating loss. “He’s a winner, and so to see the team like this, it’s not easy and he’s not happy to be on the bench.”

He highlighted that from what he has been told, the situation in training is the same. “Ronaldo is doing his best in training and his relationship with the manager and his teammates has not changed.”

“If it continues like this, we will see Jorge Mendes working in January to find a solution. I think the situation has to change if they want to keep Cristiano at the club in January.”

“I can confirm nothing has changed on Mendes’ side. Also because it is too early for clubs to plan for January, and I think this will happen during the World Cup. This month is very important in Ronaldo’s future.”

Speaking after yesterday’s loss, ten Hag said he refused to bring Ronaldo out of respect for his career. Romano believes Ronaldo’s lack of pre-season is the main reason behind his exclusion from the playing eleven.

Ronaldo seems to be the third-choice striker behind Marcus Rashford and Anthony Martial. His exclusion from the starting lineup in a game as big as the Manchester derby was huge. His failure to register even a minute in the match further infuriated Manchester United fans.

“Ten Hag always wants his players to be fit and give 100% in the games. Rashford is doing very good in general. Martial is back and needed minutes. It is not a technical, but a physical decision for Ronaldo”, Romano said.

Ronaldo’s future seems to be revolving around his play-time and form. Internationally his performance in the World Cup will be very interesting to watch and we will have to wait and see what he decides. As for his domestic future, Erik ten Hag, and Ronaldo’s performances will play a huge role.