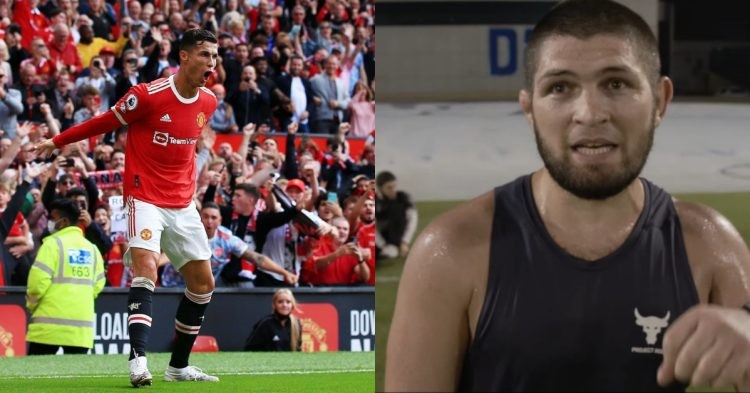 It does not look like Khabib Nurmagomedov is giving up on his friend and soccer legend Cristiano Ronaldo. Ronaldo, who is going through a rough patch of form at Manchester United, has only scored 1 goal in 10 matches for his club side this season. The only goal came against Moldovan side FC Sheriff in a Europa League game.

Despite all that, Khabib is still very much a supporter of the Portuguese footballer. Khabib is currently in Dubai, helping his cousin Islam Makhachev prepare for the vacant lightweight title bout against Charles Oliveira at UFC 280.

In preparation for the fight, Khabib and his team was seen playing soccer in order to build up the necessary cardio. During that, he was seen paying homage to Ronaldo by hitting his trademark ‘Siuu’ celebration.

MMA fans already know how big of a soccer fan The Eagle really is. He was in attendance inside Old Trafford for a Man United home game last season, where he met legendary ex-United manager Sir Alex Ferguson and plenty of other Red Devils. But the main attraction of attending the game was getting to see Cristiano Ronaldo in action.

Ronaldo and Khabib have been spotted together a few times before as well. In an old interview, Khabib even claimed that Ronaldo told him about the move to Manchester United in the summer of 2021 ahead of anybody else. So there is obviously a camaraderie between the two. Khabib, who is famous for his loyalty, is certainly backing his friend to rejuvenate himself.

Cristiano Ronaldo seems lost on the pitch at the moment. Obviously at the age of 37, one can not expect Ronaldo to run rampant on the pitch at Old Trafford as he did in 2008. However, the drop-off in form for the current season is staggering. Last season, Ronaldo scored 24 goals for Manchester United in total and was their highest goal scorer.

But, under the new manager Erik Ten Hag, Ronaldo can not even get into the team. In the Europa League game against Omonia, Ronaldo finally got the 4th start of the season. Although he had plenty of opportunities to score a goal, Ronaldo just could not seem to hit the target. His frustrations on the pitch were visible.

What are your thoughts on the matter? Do you think the world is finally witnessing the downfall of Cristiano Ronaldo? Or do you think it is just a blip in the radar? Let us know in the comments down below.