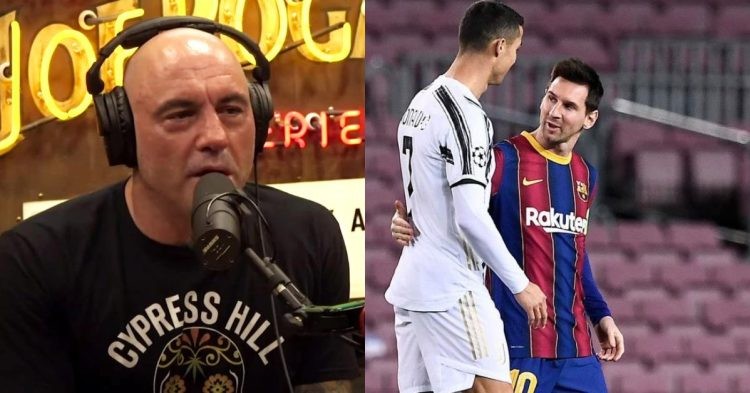 Joe Rogan has one of the biggest and most popular podcasts in the world right now. Recently, American computer scientist and podcast host Lex Fridman was a guest on his podcast. They spoke about football, and mainly about Lionel Messi and Cristiano Ronaldo.

During the conversation, they spoke on the age-old topic of debate in football – who is better, Lionel Messi or Cristiano Ronaldo? Rogan went on to compare the rivalry to LeBron James vs Michael Jordan.

On being asked who he thought was better, Fridman replied, “Messi, by far, I don’t care. I don’t even think Ronaldo is in the top 5.” He put Maradona and Pele over the Portuguese striker. “I think the Brazilian Ronaldo is better than Cristiano Ronaldo.”

He complimented Ronaldo’s work ethic and said that he is one of the best in the world, but not in his top 5. The debate arose around the movement of Lionel Messi. “He moves like nothing I’ve ever seen, and I think a lot of people agree. They are moments of genius. It’s art.”

“If you didn’t see the face or the uniform, if you just saw the silhouette, you can tell it’s Messi.” He said that if he had to draw parallels to the world of MMA, it would be just like Anderson Silva.

He suggested people now agree Messi is better than Ronaldo because he has finally taken Argentina to international success. Argentina won the Copa America in 2021, beating Brazil 1-0 in the finals. Angel di Maria’s goal was enough to earn them their first Copa America since 1993.

Joe Rogan on the GOAT debate

Rogan seemingly agreed with the assessment that Messi was the greatest of all time. He said that if anything, Messi’s presence reminded him of Mighty Mouse. He said that due to his weight class he didn’t have many great opponents, but in his prime was the best he had ever seen.

The Messi vs Ronaldo debate has truly become a worldwide phenomenon. Even in the United States, where football has recently started becoming more and more popular, many are getting involved in the debate. Whether this debate will ever get settled remains to be seen.