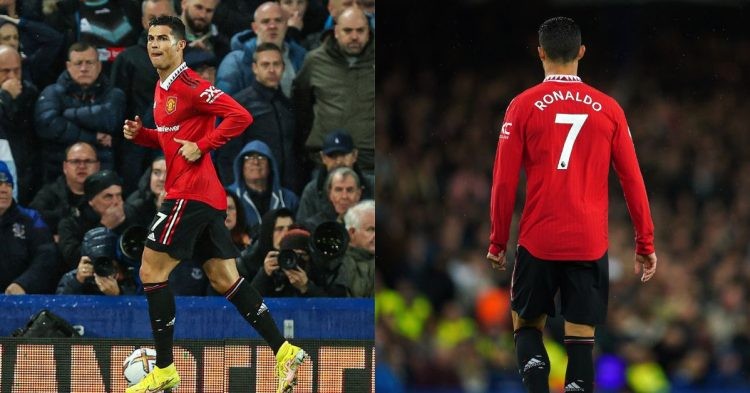 Manchester United star Cristiano Ronaldo has been having a rough last few months. He has failed to convince the manager, Erik ten Hag that he has what it takes to be a starter. Many fans have hated on the Dutch manager for his decision to bench Ronaldo for the majority of the Premier League. On the other hand, some have claimed that it is for the best that Ronaldo doesn’t play for United.

THE ONE AND ONLY CRISTIANO RONALDO 🐐 pic.twitter.com/B2ipbUhsZN

So far in the 22/23 season, Ronaldo has only scored one goal, against Sheriff in the Europa League. That was until today, as the 37-year-old slotted the ball home against Everton’s Jordan Pickford. His calm and collected left-footed strike brought the good old days for the fans as the CR7 scored his first PL goal of the season. In addition to that, he has also reached a huge landmark in his career.

Ronaldo has played for Real Madrid, Juventus, Sporting, and United as well. The milestone he reached today speaks at length about what kind of a player he has been. In the last two decades, he has been the best player in the game alongside Lionel Messi. Many have written him out, claiming that he was finished. However, the Portuguese striker has shown that he still has it in him.

Respect the only World Class player you have and put him to start the games.

A fan wrote, “Respect the only World Class player you have and put him to start the games..” The interesting point to note is that ten Hag had kept Ronaldo on the bench for the game against Everton as well. Unfortunately for Anthony Martial, he faced an injury and was replaced by the main man himself.

Put some respect on my GOAT 😤🔥🔥 pic.twitter.com/ZdB6nB8mac

In addition to that, some fans have hated Messi as well. One Twitter user mentioned, “Messi will never reach these levels.” The PSG star is currently on 691 goals in 825 games, according to Transfermarkt. Given his sensational for the French club in recent weeks, Messi will also mostly reach the prestigious milestone.

Messi will never reach these levels 😭😭

The Messi-Ronaldo has been going on for ages, and it will proceed in the same manner for years to come. The reason for that is mainly because of how big of a rivalry the pair have had over the years. In all of the sports, there hasn’t been any other rivalry like these two players.

And on top of that, he did it it at best clubs and best leagues and with different teams, which says about consistency which is about the most difficult challenge. Anyone can have a good season, but having all good seasons says it all. He has nothing else to prove at this stage

A fan has also described why Ronaldo makes a strong case for the GOAT status. The fact that CR7 has done it at the biggest leagues like the PL, La Liga, and the Seria A should show that he is one of the greatest. Moreover, no other player has showcased the longevity that Ronaldo has shown time and time again throughout his goal-filled career.

He has scored 5 goals at Sporting and 101 goals in 134 games for Juventus, winning the league on two occasions. Adding on to that, Ronaldo was a different breed at Real Madrid when he scored 450 goals in just 438 games. Currently, he’s on 143 goals for United, as he looks to increase that number in the near future.