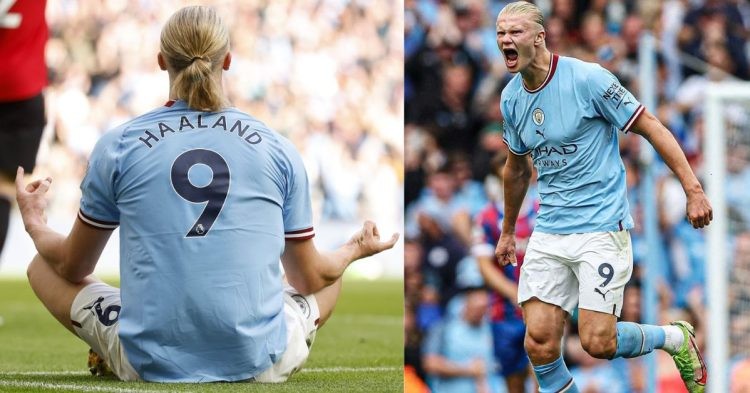 Erling Haaland has had a blistering start to his life in the Premier League. He has scored 15 goals and got 3 assists in just 9 games in the Premier League. In the Champions League, he scored 5 goals in his first 3 matches in a Manchester City shirt. For Norway in the Nations League this campaign, he has managed to score 6 and assist 1 in 6 games. There have now been many popular petitions to deport Erling Haaland from the UK.

Seeing such a grand start to life at Manchester City for Haaland, fans in England have started petitions to ban the Norwegian striker. Pep Guardiola and other teammates reacted to these petitions as well.

There have been many petitions to deport Erling Haaland from the UK. A very popular one reads, “Petition to have Erling Haaland removed from the Premier League for being a robot.” This petition has got a staggering 2 million signatures.

A petition to get Erling Haaland banned from playing in the Premier League because ‘he’s a robot’ got nearly 2 million signatures. 😭😭 pic.twitter.com/Cy7ZiiaBsm

The summary read, “It’s just simply not fair. We can make a change. Now is the time for us people to act. This robot should not be allowed to carry on in our country.” Another petition read, “Remove Erling Haaland from the UK.”

Its summary read, “If things don’t change, it will only get worse. This guy is nine league goals away from equaling last season’s golden boot winner. This is disrespectful to the establishment.”

Of course, these petitions have no merit to them. They are dead in the water. Pep Guardiola, in his recent press conference, reacted to the petitions. He spoke on the petitions, “Nice joke, yeah. The joke is good.”

Pep Guardiola spoke after Manchester City’s 4-0 win against Southampton, “I’m so upset with him. He didn’t score three goals so that’s why the petition to sack him from the Premier League isn’t going to happen.”

Aymeric Laporte has also joined in on the jokes to get Haaland deported from England.

Many fans reacted to the petitions as well.

How far with the petition to deport Haaland? The longer they wait, the more devastating the impact

Everyone seems to be in support of the petition

Having seen this😂 i support that petition to ban Erling Haaland out of EPL. pic.twitter.com/E82nNAZqdU

Erling Haaland will, in all probability, end up breaking many records at Manchester City. He looks primed to beat the record of 32 goals in a 38-game season in the Premier League, and we can’t see anyone who will stop the Norwegian.