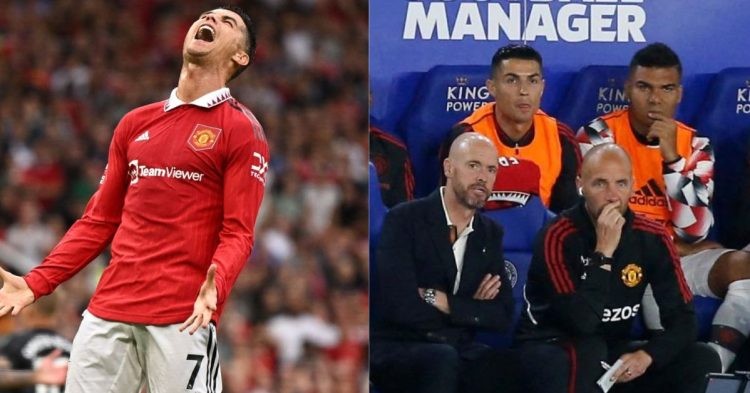 Cristiano Ronaldo on the bench (Credits : SkySports and The Sun)

Cristiano Ronaldo is one of the biggest players in the world. The fact that such a big player was an unused substitute in a Manchester derby raised many eyebrows. Many fans were infuriated by Erik ten Hag’s decision. Along with them, even Ronaldo was furious at the call.

Speaking to the media Erik ten Hag said that Ronaldo was obviously unhappy he wasn’t used in the derby. Fabrizio Romano has since come out to say that while Ronaldo is unhappy on the bench, there are no problems between him and Ronaldo.

Fans have reacted to news surrounding Ronaldo being benched and his relationship with Erik ten Hag. Reacting to Fabrizio Romano’s report on Ronaldo’s situation at the moment a fan wrote, “Ronaldo will score today mark my word. The most dangerous version of Ronaldo is when he is not scoring in a match.” Ronaldo did indeed score in Sunday’s face-off against Everton.

Others said, “Let him go to Sporting Lisbon and play for free till he’s 40… Because there’s no place for him elsewhere.” Another wrote, “If I was the coach, I would have benched him too, the guy is finished.”

The relationship between Ronaldo and Erik ten Hag, fans react

According to Duncan Castles, Ronaldo had privately complained about the nature and quality of Ten Hag’s training sessions. This was apparently in response to Manchester United suffering heavy defeats to Manchester City and Brentford.

This comes as a shock as this seems to be a time of positivity for Manchester United. Ronaldo, although failed to score mid-week in the Europa League, had a decent performance. Apart from the Manchester City loss, United have played good football and seem to be on the rise under ten Hag.

The Ronaldo stories from Duncan Castles are leaks from Cristiano’s team.

And it really isn’t a good look for him. It’s all good saying we should have let him go, but the only offer we got was from Saudi Arabia. He wanted us to pay up his year and let him move for free.

The report from Fabrizio Romano completely contradicts Duncan Castles’ report. There have always been reports that Ronaldo is unhappy at United, but his professionalism and respect for Erik ten Hag have been unquestionable.

Ronaldo should be banging Ten Hag’s head through the door right now, give a slide tackle to Martinez according to Duncan castles, but how dare he smile and be friendly with the squad! Too much toxicity to bear pic.twitter.com/b0pgKxQNNt

Even when he left United all those years ago, he was a complete professional. He was interviewed the night before his last game for United in 2009, a Champions League final. In order to prevent any dressing room disruption, he had denied reports linking him to Real Madrid. He did depart a few weeks later but showed his class. Showing such maturity as a youngster, it would be contrasting for him to put such news out when he has become such an experienced campaigner.