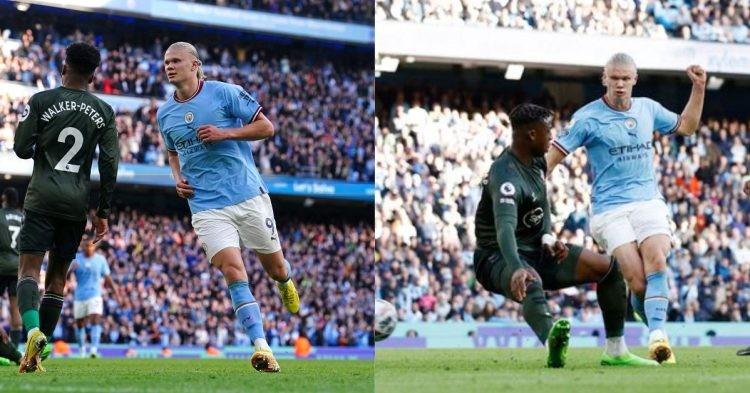 Erling Haaland in a Match against Southampton (Credit: Twitter)

These days, Erling Haaland is one of the names we hear quite often. The Norwegian is in scintillating form this season for Manchester City.  Haaland has a great opportunity to make history this weekend. He has the chance to beat Ronaldo and Drogba’s hat-trick records, if he manages to score another three goals against Liverpool on Sunday.

Troy Deeney believes that Haaland might outshine all of Thierry Henry, Didier Drogba and Mo Salah in terms of how they altered the job of a forward in English Football. Manchester City striker Erling Haaland has been receiving accolades from many, including Troy Deeney who compared him to a Boxing legend.

Troy Deeney, the Birmingham City player, praised Erling Haaland in his column in ‘The Sun‘. He said that he considers him the same as Mike Tyson when he was at his best. A boxer who could mentally gain the upper hand over his opponents even before stepping into the ring.

In his column in ‘The Sun’, the Birmingham City man compared Erling Haaland to the boxer Mike Tyson.

He said, “Haaland reminds me of Mike Tyson at his peak, who mentally beat his opponents even before starting the fight.”

Deeney believes Haaland can break the all-time Premier League goals record, which is currently held by Dixie Dean (Everton), who scored 60 goals in one season.

I think that Haaland could go further than that. If he continues at this rate and plays every match this season, he would finish with around 66 goals. “

Finally, he concluded, “There were people who thought he would not be able to keep up the level he showed at Borussia Dortmund in the Premier League, the hardest league in the world. Are players not meant to need a bit of time to settle in when they move to England? That is another myth Haaland has debunked. And, call me crazy, but I think he could become even more lethal when his teammates adjust to his style of play. ”

Pep and Haaland march on

We saw another piece of Man City brilliance at the Etihad Stadium on Saturday. The men in blue defeated Southampton 4-0 at home. Cancelo, Foden, Mahrez, and Haaland were all on the scoresheet for Man City.

Haaland scored in the 65th minute of the game, which felt like a lot. The positive and immediate effect he has had on this Man City side is mind-blowing. He has already scored 20 goals in all competitions for Man City this season.

Erling Haaland has already scored 20 goals in all competitions for Man City.

With fifteen goals and three assists in just nine matches, he has been unstoppable so far this season. Many pundits are worried that it’s just October, and he has scored 15. What will he do if he stays fit and plays most of the matches?

While everyone else will be busy with the World Cup, he will be free and will look to capitalise on this golden opportunity. We might see more records being smashed in the premier league this season, if Haaland stays consistent for the whole season.