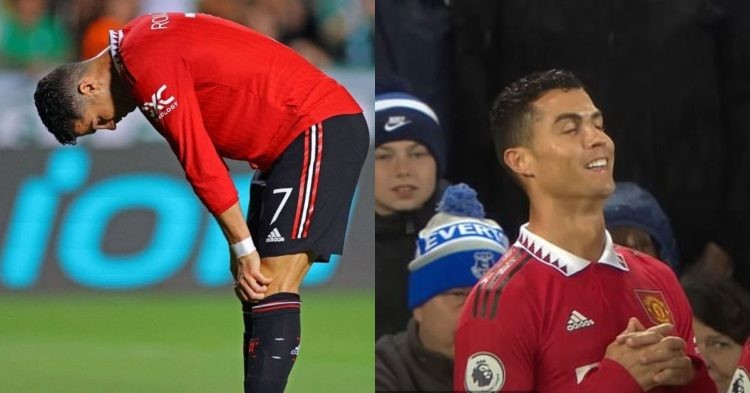 Cristiano Ronaldo ‘s season has been far from perfect so far. He has scored just 2 goals in all competitions this season and provided just 1 assist. Ronaldo fans although, should not be disheartened. His performances have seen an upward trajectory of late.

Despite failing to score against Omonia last midweek his performance was pleasing. He then came on as a substitute against Everton and scored the goal to give Manchester United the win. He also provided an assist for a ruled out Rashford goal. His performances since Wednesday show that the past few months were probably just a blip in form, and the Ronaldo is far from being finished at the top level.

Fans react to CR700 and his performance against Everton

Ronaldo scored his 700th goal in club football. Fans reacted to this and his performance against Everton.

The Tackle, The Pace, The counter attack.
Cristiano Ronaldo. 🤌🐐 pic.twitter.com/BLntpOh74F

Lionel Messi isn’t far behind Ronaldo in this aspect either.

His performance against Everton earned him many plaudits.

Cristiano Ronaldo vs. Everton – The Return of the King. pic.twitter.com/FqFMzDsNi2

Maybe these two games truly are the return to form for the Portuguese.

With the World Cup ahead his form is vital for Portugal’s success. Along with Rafael Leao, Diogo Jota, and Bernardo Silva, Cristiano Ronaldo has plenty of company in attack. He is the captain of this young Portuguese team and his leadership qualities will truly be on display for the World Cup.

As for Manchester United, with Anthony Martial getting injured yet again, Ronaldo’s importance has shot up yet again. He was unable to get any game time under ten Hag, but Rashford performing well on the left-wing and Anthony Martial’s injury means that his place in the team seems to be cemented for a while.