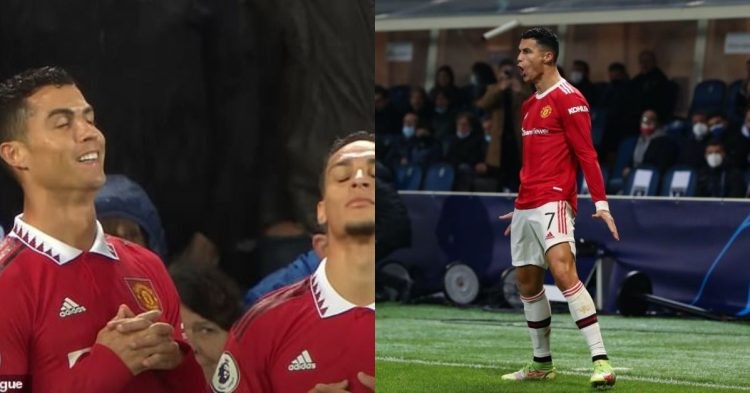 Cristiano Ronaldo brought up his 700th club goal with a wonderful left-footed goal against Everton. He became only the second man to achieve this feat, with Lionel Messi not far behind him with 691. Everyone expected Ronaldo to bring on his iconic and trademark celebration but he shocked the world with his new celebration.

Instead of his iconic “Siu”, Ronaldo celebrated with a hug to Marcus Rashford. He then showed us his new celebration. Ronaldo and new summer signing Antony stood upright with their head tilted back, and their palms crossed across their chest.

Why did Cristiano Ronaldo do this celebration?

The celebration is apparently an inside joke between the teammates of Manchester United. Ronaldo is a top athlete and he takes care of himself in the best way possible. Part of being a top athlete is getting ample amount of rest. Fans have named the celebration “Peace of mind”.

Ronaldo have invented a new celebration called “peace of mind”

Antony is learning from the 🐐
This picture really made my Night pic.twitter.com/mpuJbJ6f8R

Ronaldo’s celebration of standing upright with his head tilted back and palms crossed across his chest is a reproduction of his sleeping style. There were reports that Ronaldo naps several times a day to keep himself well-rested.

When travelling with the Manchester United squad, Ronaldo apparently sleeps with his palms crossed across his chest. Ronaldo’s sleeping style was observed by his teammates and the celebration was surely a joke towards this. The celebration and the sheer joy Ronaldo’s teammates had after him achieving 700 club goals shows the camaraderie and strong bond between them.

The celebration completely contradicts Duncan Castles’ report that Ronaldo was unhappy with Erik ten Hag’s management. He seems completely comfortable with his teammates and ready to give his all to his team. He might not have been happy with his own performances and the fact that he was playing in the Europa League.

As reported by Fabrizio Romano, Ronaldo is very happy under Erik ten Hag and there are no cracks in their relationship. Based on the celebrations the dressing room atmosphere seems to be a very positive one.

🚨🇳🇱| It’s believed that Erik ten Hag has named a group of four leaders to run the dressing room, these are:

The group is to lead the squad by example. #MUFC 🔴

Under Ole Gunnar Solskjaer and Ralph Rangnick, the story was reportedly totally different. There were apparently dressing room cliques that leaked team news and other negativity from the club. Such news has been vastly reduced ever since the arrival of Erik ten Hag. The manager seems to have brought positivity along with his attacking playing style to Old Trafford.