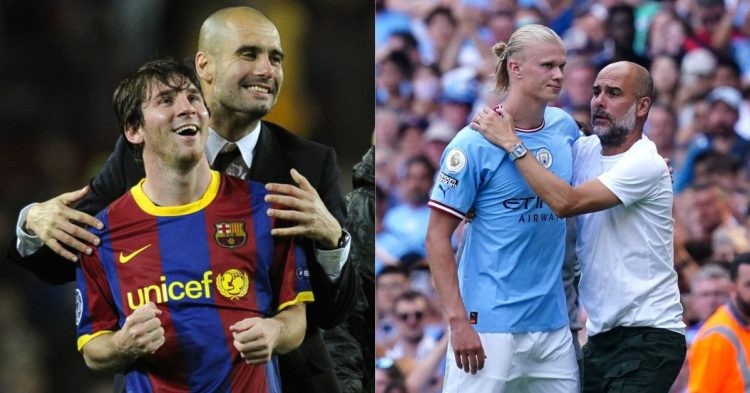 The entire world has witnessed Erling Haaland’s brilliance once again recently. The Norwegian has made the Premier League look too easy for him as he scores hat trick after hat trick. After playing in just 8 league games so far, Erling Haaland has found the net 14 times in the PL. It has been the best run of his career so far. He certainly looks like the favorite for the 22/23 PL Golden Boot.

Erling Haaland (14) already has twice as many Premier League goals as the next highest scorer Harry Kane (7).

Eyes on the prize 👀 pic.twitter.com/5cV8OWtWjM

One of his hat trick victims were City’s rivals Manchester United. The game was one of the most-awaited of the season as United were one of the admirers of the then-Dortmund star. Since his father also played for City, it wasn’t that hard for Erling to choose them. The game ended 6-3 to the Citizens as Phil Foden also brought home the match ball.

After the game, Haaland drew comparisons with both Cristiano Ronaldo and Lionel Messi. The former was also available for the game but Erik ten Hag chose to bench him for a reason. After the game, Man City manager Pep Guardiola reacted to the result. He also explained the difference from his star no.9 and the teenage Leo Messi he used to coach at Barcelona.

Can Erling Haaland reach the level of Lionel Messi in the future?

Pep said, “The difference, Erling needs maybe all his mates, you know to do it. Unbelievable. Messi had the ability for himself to do it.” Although the Spanish manager’s comments may indicate that Haaland isn’t at the level of Messi’s back then, it shows how great the latter was.

Pep Guardiola on Lionel Messi and if he now gets the feeling that Erling Haaland will score in every game: “The difference, Erling needs maybe all his mates, you know to do it. Unbelievable. Messi had the ability for himself to do it.”pic.twitter.com/rodCdrrvrT

Under Pep, Messi was the best player on the planet. He played in 219 games for Barcelona as the Spaniard led the club. That was from 2008 till 2012. In those games, Messi scored 211 goals and 97 assists. That meant the Argentine forward was involved in more than 1 goal per game. In addition to that, 2012 was Messi’s most successful year as he scored 91 in just a calendar year, a record that is still yet to be broken.

We still do not know if Haaland will turn out to be on Messi’s level. But what’s given is that he is a generational talent and he will conquer the footballing world one day, if he isn’t already doing that now.