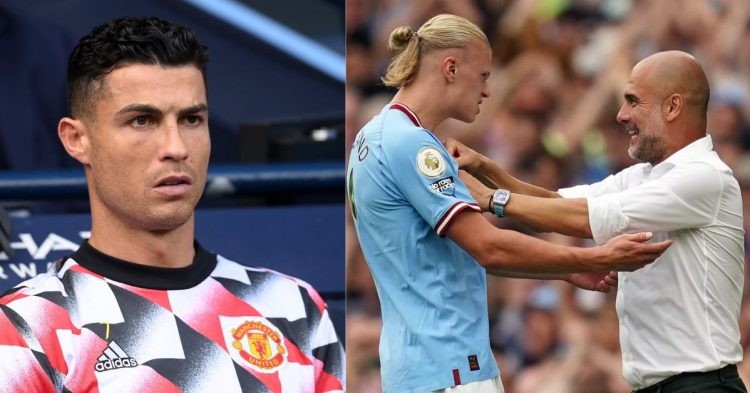 Manchester City recently played against their city rivals Manchester United in the first Manchester Derby of the 22/23 season. The Citizens took the win at the Etihad as they destroyed United to a score line of 6-3. It was raining hat tricks as both Erling Haaland and Phil Foden got on the scoresheet three times.

The huge win takes City to 2nd place in the English Premier League, as they sit one point off from league leaders Arsenal. We can’t ignore the fact that Man City are the only undefeated team in the league this season. They have won 6 of their 8 games so far, drawing against Newcastle and Aston Villa a few weeks ago.

A good day at the office! 🙌

After the game, City manager Pep Guardiola reacted to the win. He said, “Yeah it was really good. Everyone watched it. There are a few things to improve but six goals vs United, who had come from four games winning, including Arsenal and Liverpool is really good.”

As Pep said, United were on a good run of form. Coming into the Derby, they were confident to get back home with a result. The main reason for that would be their wins over Liverpool and league leaders Arsenal. In fact, United shattered The Gunners’ invincible dreams earlier this season.

After the defeat, Erik ten Hag also opened up on his feelings. He told manutd.com, “Very disappointed, and especially, lack of belief. I didn’t expect it. Our team was, in the games, obviously that was some weeks ago.”

We all know United still have in their locker to bounce back from this disappointing defeat. After all, they have one of the GOATs, Cristiano Ronaldo, sitting on the bench. Although he may be a shadow of his former self at times nowadays, he still is one of the best strikers in the world.

The real problem for ten Hag and Man Utd would be to figure out how they can involve Ronaldo in their game plan, because the times they haven’t done that, it hasn’t really worked out in their favor. On the other side of the city, Man City are looking strong to challenge for the title once again. They will defend their title to the end against Arsenal, as it stands right now.