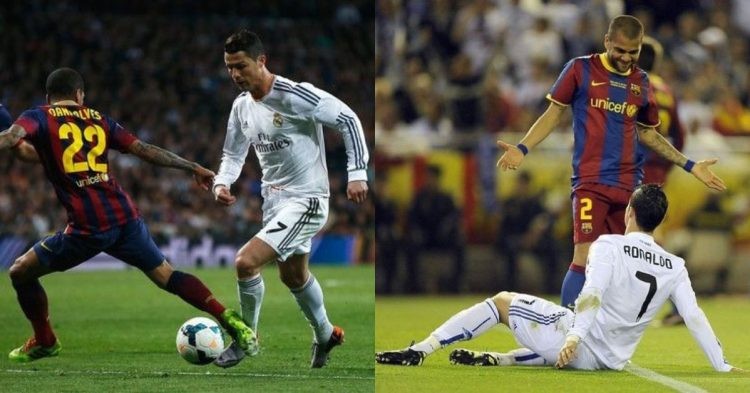 Dani Alves, arguably one of the best right-backs of our time, has praised the currently struggling Cristiano Ronaldo. The rivalry between the two was best seen as they shared the pitch in both Real and Barcelona’s dominating years.

Alves signed a deal with Liga MX club Unam and in an interview with journalist Hugo Sanchez described his rivalry with the Portuguese. He admitted that he felt that Messi and Pelè were the greatest players of all time, but labeled Ronaldo as the most difficult opponent he ever faced.

Starting his career at Brazilian club Bahia, Alves moved to Sevilla in 2003, before joining Barcelona in 2008. He enjoyed the most successful part of his career at Barcelona. The Brazilian won six La Liga titles and three Champions League titles before leaving for Juventus in 2016. In addition to that, enjoyed brief spells at PSG, São Paulo, and a season-long return to Barcelona before signing for Mexican club UNAM.

Dani Alves even labeled Ronaldo as the most difficult opponent he has ever faced. On being asked about the Portuguese, he said, “Cristiano Ronaldo. This b****** doesn’t let you breathe for a second. I didn’t do too badly, but it’s difficult. He’s a scoring machine.”

He named Messi the best player in the world and offered much deserved praise to Brazilian legend, Pelé. “Pelé because football has changed. Messi changed a generation. All those people who are more than football, I’m going to stay with them.”

Alves added, “for me, Pelé should not enter in that debate. Who is the best player in history? Messi. Pelé doesn’t fit in there”, he said. He jokingly remarked to Messi that if the Argentine went on to surpass his trophy count, he would continue to play until he was 50.

The rivalry between Real Madrid and Barcelona has dominated Spanish and European football for many seasons. Since 2000, there have been only 4 seasons when neither of the club has won the La Liga title. Since 1990 Real has won the Champions League 8 times and Barcelona 5 times. Between 2009 and 2016, Alves and Ronaldo enjoyed a great rivalry in the El Clásico.

Ronaldo vs Dani alves was always a big clash pic.twitter.com/7GoB6QQ5eM

Ronaldo has won 32 titles across his 20-year senior career. He has also won multiple Ballon d’Ors and many other individual titles. Alves, on the other hand, has won 46 titles in his senior career so far. Both started their senior club careers around the same time and have gone on to successfully represent both club and country.