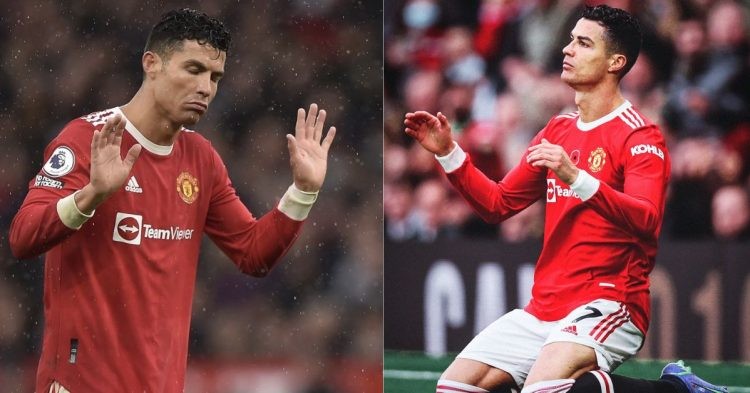 Football is a game where emotions can take a toll on players. There have been times where many players have lost their cool when they are not happy with what happened in the game. One of those instances was when Cristiano Ronaldo lost to Everton with Manchester United on 9th April 2022.

Man Utd lost that game because of Anthony Gordon’s 27th minute goal. That defeat was just another one for then-manager Ralf Rangnick as he tried to bring back balance and stability to the team. Despite Ralf’s best efforts, United could not finish in the Top 4 last season. It seems like all this was at the back of Ronaldo‘s mind, causing him to overreact.

Cristiano Ronaldo has been cautioned by police after knocking a phone from a supporter’s hand at Everton in April.

It appears that after the game, Ronaldo knocked a phone from a young fan, Jake Harding’s hands at Goodison Park. The action by the football legend has surprised many.

After the incident, reports say Ronaldo invited the fan to Old Trafford. He took to social media to apologize. He said, “It’s never easy to deal with emotions in difficult moments such as the one we are facing. Nevertheless, we always have to be respectful, patient and set the example for all the youngsters who love the beautiful game.”

“I would like to apologize for my outburst and, if possible, I would like to invite this supporter to watch a game at Old Trafford as a sign of fair-play and sportsmanship.”

However, the fan’s mother, Sarah Kelly declined and spoke out against CR7 about it. She said to Sky News, “Why should I travel to Old Trafford? Why would ‘a Blue’ want to go to a Red?” as she mentioned she was an Everton fan. “He can’t digest things the same way a person with no disability would be able to digest things,” as it was revealed that he dealt with autism.”

The FA announced today, “Cristiano Ronaldo has been charged with a breach of FA Rule E3 for an incident that took place after Manchester United FC’s Premier League match against Everton FC on Saturday 9 April 2022.It is alleged that the forward’s conduct after the final whistle was improper and/or violent.”

Manchester United have officially responded in a statement, mentioning their support for the player. “We note the FA announcement in relation to Cristiano Ronaldo. We will be supporting the player in response to the charge.”

FA’s charge against Ronaldo has received mix responses from fans

As we all know, the incident happened a while ago. Since then, the season has ended and the new season is already underway. Many fans think the FA have taken too long to charge Ronaldo and find him guilty. “Embarrassing from the FA. Happened 6 months ago already been dealt with by police. If they wanted to charge him they should have months ago,” one Twitter user said.

Embarrassing from the FA. Happened 6 months ago already been dealt with by police. If they wanted to charge him they should have months ago.

However, on the other hand, some fans are claiming that Everton should be the ones who are charged. One user mentioned, “Have they charged [Everton] for failing to protect the player leaving the pitch. Clearly issues when supporters can become involved with players leaving the stadium.”

Have they charged @Everton for failing to protect the player leaving the pitch. Clearly issues when supporters can become involved with players leaving the stadium

Saying Ronaldo was in a hostile situation against the fan may be an exaggeration if we’re being honest. If it was an adult and there was a serious possibility that things could go wrong, Ronaldo’s actions might be taken as defense. But in the video we can witness Ronaldo letting his emotions get the better of himself, as he admitted too.

The charge of Man Utd’s no.7 will also see the player receive a punishment. Usually, a breach of the FA’s E3 rule would mean that the player receives a one match ban and a fine of £8,000. If this is the case for Ronaldo, he could be out for the Manchester Derby on October 2nd. That would be a huge problem for Erik ten Hag since Marcus Rashford and Anthony Martial are also huge doubts due to injury.