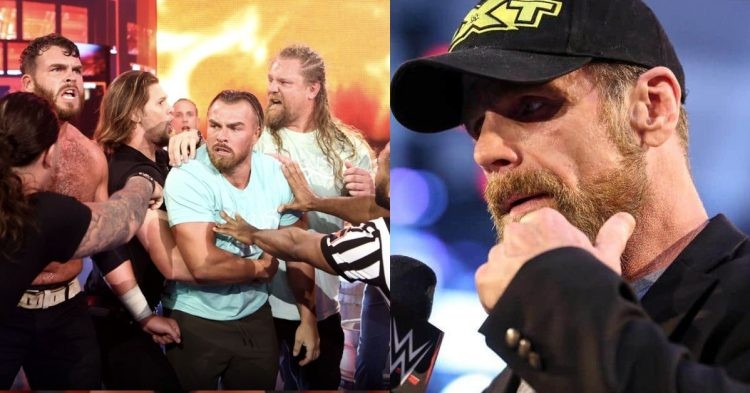 Since the pair joined NXT 2.0, Gallus has been after Brooks Jensen and Josh Briggs, the former NXT UK Tag Team Champions. On Tuesday, they would face Mark Coffey and Wolfgang in the main event of a Pub Rules Match. Backstage fights between the two teams would occur before the contest, Security personnel and WWE representatives were attacked by the former “NXT UK” stable, which led to their detention by police. WWE shared the news of the indefinite suspension on social media following the conclusion of Tuesday’s show.

As a result of tonight’s unexpected ending, Gallus has been indefinitely suspended, NXT tweeted after the show: “Due to Gallus’ actions involving the assault of WWE officials and security after their Pub Rules Tag Team Match, Wolfgang, Mark & Joe Coffey have been suspended indefinitely, effective immediately.”

With broken glass, leather straps, and Mark Coffey put in a garbage can, the Pub Rules Match was completely crazy. Joe Coffey stepped out throughout the fight to defend his stablemates despite protests from WWE officials, but Jensen and Briggs would ultimately secure the victory.

Wes Lee, a former member of the NXT Tag Team Champions, defeated Tony D’Angelo on WWE NXT 2.0 on September 27 to secure a spot in the North American Title Ladder Match that would occur at the company’s Halloween Havoc event on October 22.

Who will earn a spot in the #WWENXT North American Title Ladder Match?@WesLee_WWE and @TonyDangeloWWE fight for the opportunity! pic.twitter.com/3fwA8NeD0F

After Shawn Michaels deemed Solo Sikoa unable to compete against Carmelo Hayes, who is now the champion, Sikoa was forced to relinquish the North American Championship, making his victory over the latter’s championship void. Michaels would then declare a four-way ladder match for the vacant North American Title, that would occur on Saturday, October 22 at Halloween Havoc.

Oro Mensah beat Grayson Waller on last week’s show to earn the second position in the four-way ladder battle, and Carmelo Hayes was confirmed as the opponent since he was the title holder.

Till now Bron Breakker (C) vs. Ilja Dragunov vs. JD McDonagh for  NXT Championship and Carmelo Hayes vs. Oro Mensah vs. Wes Lee vs. TBA in a Ladder Match for the NXT North American Championship have been announced for the Halloween Havoc. More matches will be announced soon and we will update them on our website so make sure to keep an eye out.