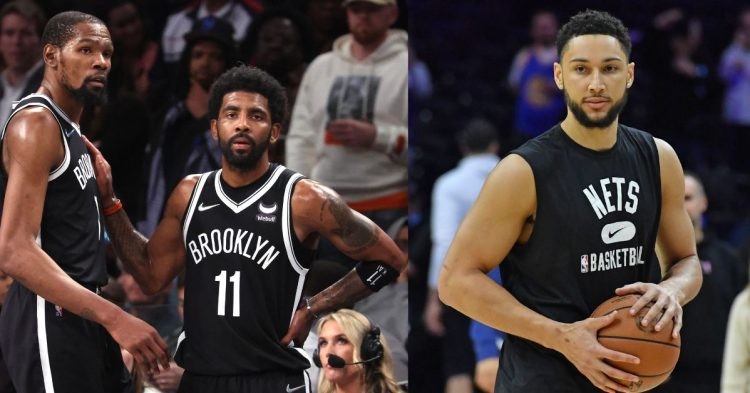 Kyrie Irving and Kevin Durant failed to make it past the first round of the Eastern Conference this NBA postseason. They were swept by Jayson Tatum, Jaylen Brown, and the Boston Celtics. This was a team favored to win the title. Yet, there was always some issue or the other. James Harden was traded away midway through the season in return for the former Rookie Of The Year ( ROTY) Ben Simmons.

Most of us can recall that Ben did not play in the Celtics- Nets series and sat out claiming to have a back injury. He did not play in Philadelphia when things got tense and cited mental reasons. It is unfair to assume Simmons will return and overcome his struggles easily. However, he could still be the key missing piece they need to win an NBA title.

That might be a slight exaggeration. Basketball is a mixture of both offense and defense. It is simply not possible to play it in a one-sided manner, especially at a professional level. The Brooklyn Nets have an overwhelming amount of offensive-scoring talent. After all, Kevin Durant and Kyrie Irving are two of the most skilled offensive players we have ever seen.

The Nets also have Seth Curry, Patty Mills, and Joe Harris. All these players are capable of shooting the ball efficiently. Therefore, Simmons will have more than enough to do facilitating and defending for the Nets. He was once hailed as the next LeBron by a few. 6’9 and has an unreal passing ability with handles.

He certainly fell short of that mark with his behavior and performance over the past NBA season. Nonetheless, this is the perfect chance for Simmons to redeem himself. He can either choose to confront his problems shooting the ball or simply adapt to a system where he doesn’t need to.

That will be quite difficult indeed. However, KD and Kyrie are the perfect teammates in this new system he has been put in with the Nets. Unfortunately, we have not seen him on the court with the Nets stars for a single game.