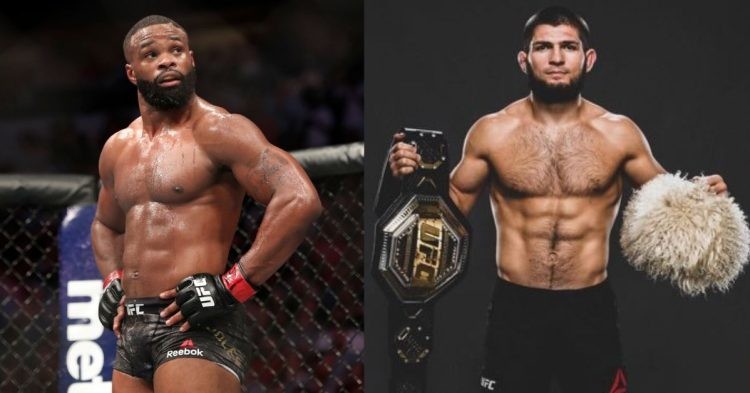 The former UFC Welterweight champion Tyron Woodley has made some eyebrow-raising comments on Khabib Nurmagomedov in his latest appearance on BS w/ Jake Paul. Worth mentioning that Jake Paul and Tyron Woodley have fought twice inside the boxing ring with Paul emerging victorious in both of those fights, and in some fashion in the second bout by Knocking out the former welterweight king, Tyron Woodley.

When asked if Khabib makes it to his top 10 fighters list, Woodley responded “[Khabib] on my top 10 list? Probably not. I like him. I respect him a lot. I think he’s a good fighter. I think his type of fight for that weight class [lightweight], nobody could do that besides Sean Sherk back in the day, but like, he was just really aggressive, but I didn’t see the wrestler with good hands fight him so I couldn’t really jump on that train.”

Keeping Khabib Nurmagomedov out of the top ten list is certainly surprising considering the domination he portrayed throughout his career. Yes, he only defended his lightweight title thrice, but the way he dominated top lightweight contenders like Dustin Poirier and Justin Gaethje is something that till date hasn’t been replicated.

And obviously who can forget the famous mauling of the former lightweight champ Conor McGregor at UFC 229. Khabib may not have the vastest record, but anyone who saw his performances realizes that the level of domination he imposed on all of his opponents was unlike any other fighter. The fact that Khabib only lost two rounds in his 13-fight long UFC career sums up the argument.

Although Khabib has a strong resume to be considered one of the best ever, the five fighters that made it to Woodley’s top 5 lists were Anderson Silva, Georges St-Pierre, Jon Jones, Demetrious Johnson and Carlos Condit. Woodley also named Anderson Silva as the MMA goat, explaining that he did everything in a ‘really respectful way’. Talking about Jones he said, “I think Jon Jones is the best fighter we’ve seen”. Woodley also declared Demetrius Johnson as the most “well-rounded fighter” and Carlos Condit his “favorite fighter to watch”. He also mentioned fighters like Dominic Cruz, Chuck Liddell and Randy Couture in his list.
Woodley will now certainly get some flak from Khabib fans for exempting him from his top ten list. Although the top five fighters he mentioned are the one’s most of the fans would agree with, but there is no way anyone on this planet would not put Khabib in their top ten greatest MMA fighter’s list considering all that he has accomplished.
Tags: Khabib NurmagomedovTyron Woodley
Previous Post