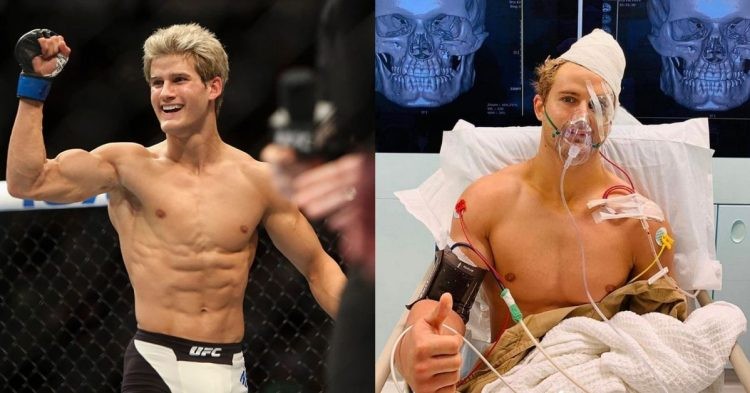 Sage Northcutt incurred devastating injuries in 2019 during his debut fight in ONE Championship: Enter The Dragon. Only 29 seconds into the fight, his opponent, Cosmo Alexandre, knocked him out in a brutal fashion. As a result, Northcutt would suffer 8 facial fractures which meant he needed to undergo surgery for 9 hour just to fix his face.

In an Instagram post, Super Sage wrote, “Fresh out of surgery…I had 8 fractures and a nine-hour intense operation. Feeling blessed for the care and the amazing support from @onechampionship, my family/friends and fans! My Terminator face is not too shabby…”I’ll be back!” Next post is catheter removal…stay tuned – JK.”

JUST. LIKE. THAT! Cosmo Alexandre knocks out Sage Northcutt 29 seconds into the first round 👊 @CosmoAlexandre #WeAreONE #EnterTheDragon #Singapore #MartialArts pic.twitter.com/Nh32Z1LNjU

The team Alpha Male fighter also had a stint in the UFC. He made his UFC debut in 2015 at UFC 192: Cormier vs Gustafsson. Northcutt knocked out Francisco Trevino in the first minute of the first round to announce his arrival in the UFC aged only 19. However, the UFC released him in spite of his respectable 5-2 record in the promotion.

UFC President Dana White said on UFC Unfiltered that he wanted Northcutt to grow his skills outside the UFC and then return to the promotion. He refused to elaborate further saying, “It was the right move for me, and I know it was the right move for him.” And Sage seemed to be following White’s advice with his move to ONE Championship, joining former UFC champions like Eddie Alvarez and Demetrious Johnson in doing so.

Sage Northcutt will return to fight at ONE Fight Night 10

Over 3 years after the disastrous injuries he suffered, Sage Northcutt will finally make his long-awaited comeback. ONE FC announced that Northcutt will make his comeback in the cage at ONE Fight Night 10: Johnson vs Moraes III on May 5. This event marks the first time ONE FC will be hosting a live event in the US.

In his comeback fight, Sage Northcutt will be taking on rising Pakistani star, Ahmed Mujtaba. The bout will be contested at lightweight. This fight is no tune-up as Northcutt is being thrown to the wolves in the form of Mujtaba upon his comeback.

Mujtaba holds a 10-2 professional MMA record. He finished his last 2 fights in the first round. “Wolverine” subbed out Abraao Amorim at ONE 163 in with only a minute left in the first round. Before that, he knocked out Indian fighter Rahul Raju in 56 seconds at Unbreakable III.

The odds seem to be stacked against Northcutt as he makes his comeback. Ring rust will be a huge concern for the American fighter heading into this bout. However, this long layoff will have given him the time needed to address any holes in his game and add new tools to his arsenal. May 5 will be a telling day for the 26-year-old Northcutt’s career.