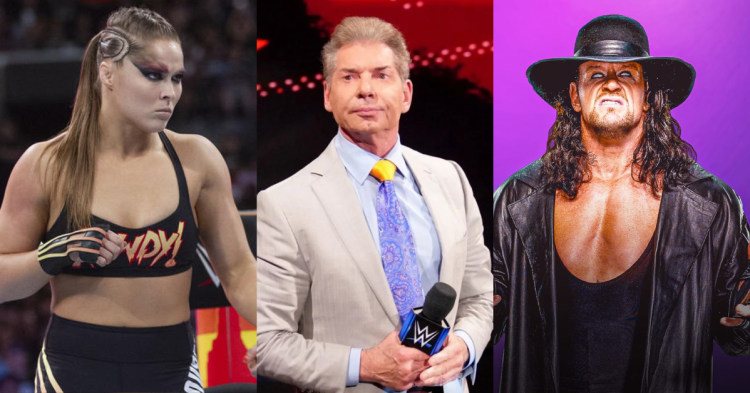 Vince McMahon has been known to ban some words, terms, and even certain moves that he thought were too dangerous to execute. Wrestler, hospital, blood, pay-per-view, and wrestle are a few of those phrases and terms. While certain words and expressions are or have been forbidden, certain actions are also no longer permitted inside the squared circle at work. “The Baddest Woman on the Planet” Ronda Rousey shared an interesting insight on The Undertaker’s finisher after someone recommended on Rousey’s The Baddest Stream on YouTube that she hit Liv Morgan with a Tombstone Piledriver at Extreme Rules.

Ronda added, “It’s such a dangerous move, nobody else is allowed to do it,”. She also said, “It’s basically a retired move.”. Although stars like Kane have used the move, Vince didn’t allow anyone else on the current roster to use the move as he has way too much respect for The Undertaker and has a special bond with him. The maneuver is a modified Piledriver in which you sit down when your opponent’s head is directly on the mat. The Piledriver is widely used outside of WWE and has been prohibited in WWE for quite some time.

Ronda Rousey has one item in mind for her battle against Liv Morgan at WWE’s upcoming Extreme Rules premium live event in Philadelphia: Thumbtacks.

Ronda Rousey successfully defended her title against Natalya at Money in the Bank in July. She won the match and kept her belt. However, Liv Morgan, the victor of the Money in the Bank women’s ladder match, would pay in her briefcase immediately following their altercation and seize Rousey’s championship by taking advantage of her fatigue and beating. Since then Ronda has been feuding with Liv Morgan for the Smackdown Women’s Championship.

#SmackDown Women's Champion @YaOnlyLivvOnce has laid down the challenge to @RondaRousey for an Extreme Rules Match at #ExtremeRules! pic.twitter.com/zAEmskdml8

Ronda is set to face Liv in an “Extreme Rules” match at the “Extreme Rules” premium live event. The “Rowdy One” recently mentioned that she intends to use thumbtacks during her forthcoming Extreme Rules match against Liv while live-streaming on her YouTube channel. Ronda said, “Definitely thumbtacks… But, I feel like there are a couple of weapons that are going to be unique to me and Liv… I do love me some kendo stick; kendo stick is kind of me and a Charlotte thing but I’ll bust out the double kendo stick and make it my thing, you know what I mean?”

Under Triple H fans expect things to actually go “Extreme” and he has already proved it by adding 5 matches with Stipulations to the Extreme Rules match card.