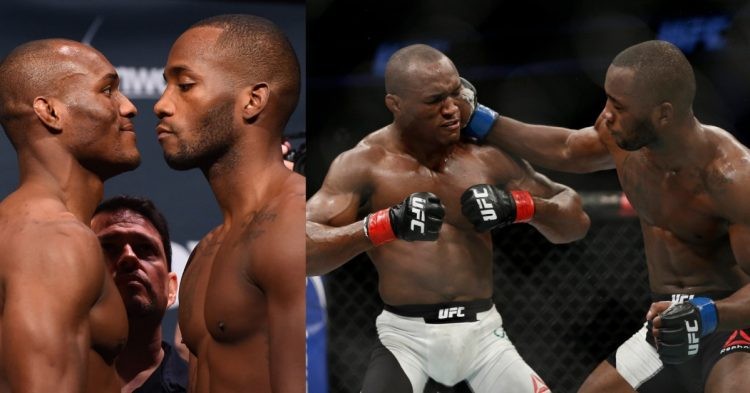 UFC Welterweight Champion Kamaru Usman is all set to defend the title for the 6th time. Usman is set to go up against Leon Edwards in the main event of UFC 278. Currently, Usman is regarded as the favourite over Edwards to get his hand raised in the contest.

However, they crossed paths previously in 2015. At the time of their first fight, Leon had 3 fights in the company, while Usman had only 1 fight in the UFC. The bout was a one-sided thrashing for Edwards. Usman used his wrestling the put the fight to the ground and dominated Leon for almost 11 minutes of the fight. He ultimately won the bout via unanimous decision.

But, Leon is not the same fighter anymore. Not only has his striking become more potent, but Edwards has also improved his takedown defence significantly. However, Edwards will not only have to worry about the takedown this time, but he will also have to be wary of Usman’s striking threats. In recent times, Usman has fallen in love with his striking and developed knockout powers.

What are the key points for Leon Edwards to beat Kamaru Usman?

Not many fans believe that Leon Edwards will defeat Kamaru Usman at UFC 278. But he will certainly not go down without a fight. The British MMA fighter has not been taken down in his last 5 fights. So it proves how hard he has been working on his wrestling since their first fight.

He may also benefit from the changes in how the fights are officiated these days. Previously, a wrestler had the luxury of holding down his opponents on the mat even if there were not sufficient actions on the ground. But in modern times, the referees do not allow the fighter on top to stall for time. Instead, they make the fighters stand up and restart the fight.

So Usman will have to do enough damage to maintain the position if he secures the takedown. But as mentioned before, Usman also loves to strike much more than he used to in the early days of his career. However, that may not be the best idea against someone like Edwards. Usman’s striking is less dependent on technique and more on his power. But Leon is more than capable of finding a way around that.

There is no doubt that Leon will be more active on his feet than Usman. If he can hit The Nigerian Nightmare from the outside while maintaining his distance, it will make Usman more and more desperate to shoot for a takedown.

Rocky can take advantage of that by landing some vicious knees to look for a stoppage. Even if he does not get the KO, it will certainly make Kamaru think twice before attempting a takedown.

How do you think the fight plays out? Do you think Leon Edwards can beat Kamaru Usman at UFC 278? Let us know your thoughts in the comments section down below.