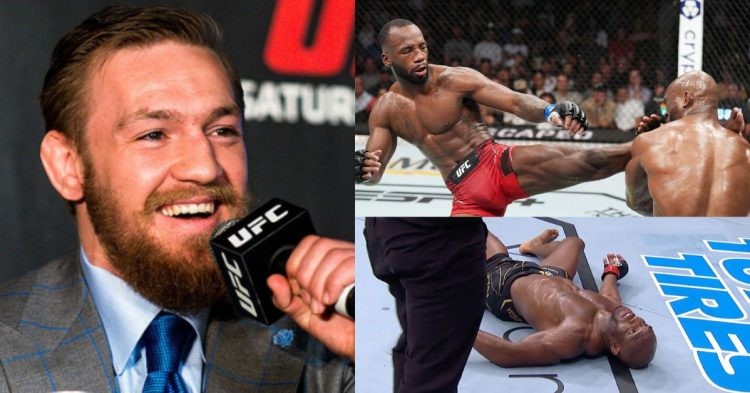 Kamaru Usman took on Leon Edwards in a highly anticipated rematch that took place in the main event of UFC 278. The Nigerian Nightmare’s undefeated UFC record and the welterweight title were at stake in front of the sellout Vivint Arena in Salt Lake City, Utah.

Leon Edwards shocked the world as he ended Usman’s winning run by knocking him out in the fifth round with a lethal high leg kick to become the new undisputed welterweight champion. Speaking about this title fight, Usman was dominating Edwards on the ground as well on the standup throughout the fight.

Leon became the first fighter to land a takedown against Usman and he almost  submitted him with a rear naked choke in the first round. But The Nigerian Nightmare skilfully got out of the submission manoeuvre and made a strong comeback in the second round.

From thereon Kamaru took Leon down every single round and controlled him on thee ground. Even in the striking exchanges, Usman had the upper hand as he pushed the Brit back. It appeared like Edwards would suffer a unanimous decision loss in the fifth round as the welterweight champion was up on rounds.

But out of nowhere Rocky feinted Usman with a left hand and landed a beautiful high kick to put him to sleep in the second minute of the fifth minute. It is needless to say that the entire arena was stunned as Usman was cruising. Nonetheless Edwards showed great resiliency and stayed in the fight and put together a great combination to become the champion.

Leon Edwards ended Kamaru Usman’s 16 fight winning run with a stunning high kick and extended his streak to nine straight wins. Following his brilliant performance at UFC 278 which helped him win the welterweight title, several UFC superstars reacted to the knockout and shared their thoughts on Twitter.

Former two division champions Conor McGregor and Daniel Cormier congratulated Edwards for his win. Whereas bantamweight champion Aljamain Sterling and Brian Ortega reacted to the KO and were very impressed with Leon’s grit.

Just like that baby, what a game! Huge congrats @ParadigmSports and Leon Edwards! ANOTHER CHAMPION!

Usman Seconds of away from retaining the belt and an INSANE headkick KO from Leon Edwards! WOW! Jamaica 🇯🇲has another UFC champion! I smell a trilogy!! #UFC278

As sad as I am, I can’t not be happy for Leon Edwards from where he came from to make it here and what he been through. Congratulations @Leon_edwardsmma !!!

It is needless to say that Leon Edwards put on a performance of his lifetime as he knocked out Kamaru Usman who was on an unbelievable winning run. Do let us know in the comments section your thoughts about Rocky’s insane KO win over Usman.