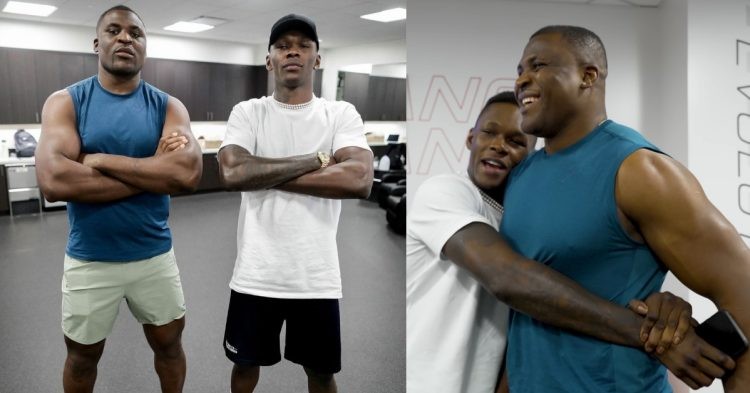 Israel Adesanya is all set to be back in action this weekend as he defends his middleweight title against Jared Cannonier in a five-round fight in the main event of UFC 276. The Last Stylebender has defeated most of the top contenders in the 185-pound division and is on a mission to wrap up the competition.

He will take on the dangerous Jared Cannonier who is coming off a terrific knockout win over Derek Brunson at UFC 272. As we are just a few days away from this big matchup, Izzy has been promoting his fight on social media.

Consequently, the UFC middleweight champion uploaded a video that comprised some of the behind-the-scenes footage of the International fight week on his YouTube channel. In one of the segments of this video, UFC heavyweight champion Francis Ngannou paid a visit to Adesanya at the UFC training facility in Las Vegas.

Francis was there to support Adesanya for his upcoming title defence and the two had a short discussion regarding some topics. Izzy was going through a recovery session after training where he noticed Francis Ngannou’s new physique and joked around and called The Predator “Super Heavyweight”.

Thereafter the two fighters shared a heartfelt moment at the end of the clip where Adesanya hugged Ngannou tightly and called him a big brother.

After having a fun-loving chat with Israel Adesanya ahead of his middleweight title defense against Jared Cannonier at UFC 276, Francis Ngannou wasted no time showering love on the middleweight champion and offering him support.

The Predator went on Instagram and posted a picture where he posed with The Last Stylebender and captioned that picture “The Kings of the game are here“.

Currently, Ngannou is recovering from a knee injury that he suffered while training for the Ciryl Gane fight. However, the UFC Heavyweight champion made sure that he is present to support his close friend Israel Adesanya for his fight this weekend.

It is to be noted that this is not the first time that Ngannou has shown up to support Adesanya as he has made several appearances for the middleweight’s title fights.

In the end, It is great to see these three African Kings that includes Kamaru Usman share a great relationship because not many fighters in the UFC have a tight bond with each other.