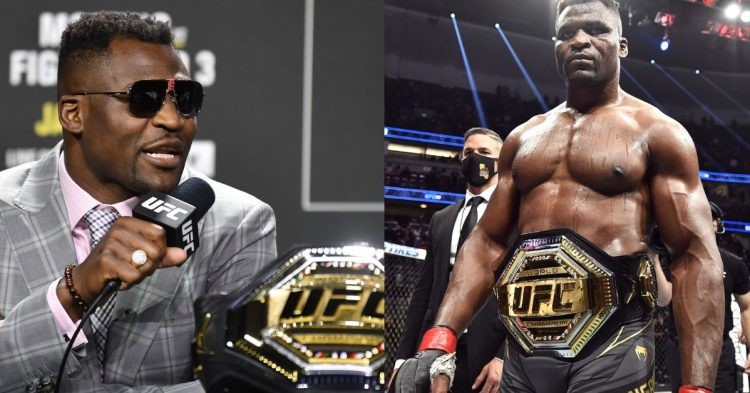 Francis Ngannou is one of the scariest men in combat sports. His terrifying knockout power made headlines as he knocked out one heavyweight after the other in the UFC. Ngannou holds knockout wins over some of the UFC’s greatest heavyweights. This list includes former champions like Cain Velasquez, Stipe Miocic, and Junior Dos Santos among others.

His status as a thrilling knockout artist has helped Francis Ngannou accumulate a lot of fame and wealth, a true rags-to-riches story. “The Predator” used to work in the sand mines of Cameroon and didn’t start training in MMA until he was well into his twenties. However, now Francis has turned it around, drawing an average salary of $530,000 per fight. This includes his fight pay which averages out at $500,000 and an endorsement bonus of $30,000.

Francis Ngannou, as of 2023, has an estimated net worth that is in excess of $5 million. He has earned over $3.37 million during his time as a UFC fighter. He is currently endorsed by CBD Research Labs, Cryo Pain Relief, Gym King Fight Division, and The Fight Game.

The Cameroonian former champ recently turned down the opportunity to become the highest-paid heavyweight in UFC history. Dana White has since confirmed that Francis left the UFC in search of more lucrative opportunities. Rumblings of Ngannou joining the PFL began emerging after his cryptic social media post, but nothing has been confirmed yet.

Why did Francis Ngannou give up his belt?

The UFC and Francis Ngannou have been going back and forth over Francis’ contract for a long time now.  The former heavyweight champion made headlines earlier after he revealed his dissatisfaction with his UFC contract. Francis stressed that he was done fighting for $500,000 per fight. This revelation, however, came after the UFC tried to re-negotiate with Ngannou before his title challenge against Stipe Miocic, which he won.

Heading into his first title defense, Ngannou was in an odd position as a champion. He had no new deal and had only one fight left on his contract. The Predator then fought out his contract at UFC 270, defending his title against Ciryl Gane. This left the UFC in a peculiar predicament with their heavyweight champion having no fights left on his contract.

The UFC was hopeful that both parties would successfully negotiate a new contract. However, as time passed, it seemed this was wishful thinking on the company’s part. Ngannou and his manager, Marquel Martin, repeatedly claimed that the UFC was lowballing The Predator. On the other hand, Dana White bashed Ngannou’s management and Martin in particular. It is noteworthy that Martin is an ex-UFC employee but now works for CAA, a direct rival of the UFC’s parent company, WME.

Now, in 2023, Ngannou has been stripped of his title. Dana White announced during the UFC Vegas 67 post-fight presser that Francis Ngannou was now a free agent. White told the press that Jon Jones and Ciryl Gane would be fighting for the vacant UFC heavyweight championship, meaning Ngannou had been stripped.