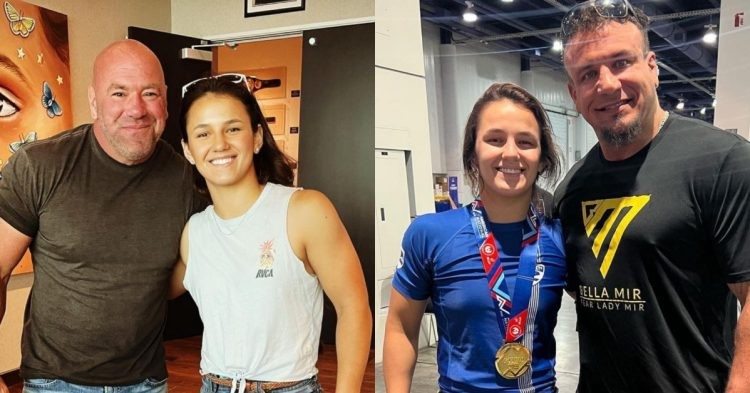 Like Father, like daughter! Frank Mir was a one-time UFC heavyweight champion. Although Mir has not fought competitively since beating Roy Nelson at Bellator 231, it looks like his legacy in the sport of MMA will continue through his daughter Bella Mir. Nicknamed Lady, Bella has already made her pro-MMA debut and currently holds a record of 3-0.

Her debut was against Danielle Wynn in October 2020. She followed it up by beating Alma Cespedes Flores and Jessica Link-Davis via rear-naked choke and armbar respectively. It just goes to show that similar to her father, Bella is also quite the submission threat on the mat. But that should not come as a surprise because the 19-year-old is an exceptional wrestler.

Born on July 1st, 2003, Mir is a four-time Nevada State champ, Junior Folkstyle national champion in 2021 and American National Jiu-Jitsu champ in 2021. She also finished 4th in junior women’s freestyle world team trials. She is only 19 and is looking to become even better. Her aspirations to touch the sky have caught the attention of a certain Dana White.

In February 2022, Bella Mir spoke to the UFC website about her upbringing and what influenced her to become a fighter. Her father was the UFC heavyweight champion and it had a big impact on her decision to choose the path of her career. Although Frank tried his best to keep away his little daughter from being a combat sports athlete, Bella had other intentions.

Frank shared an amazing story to give the fans an idea of the fighting spirit inside her. Bella apparently dislocated her arm ahead of a practice session with her softball team. Instead of seeking medical attention, she was gearing upto join the practice session. However, Frank had to pull away Bella to get her arm fixed and she was furious about it.

During the interview, Bella stated that her aim is to surpass the achievements of her father and pass them by a massive margin. As mentioned previously, Mir was the UFC heavyweight champ. Hence, if Bella manages to surpass her father, it would mean that she has achieved something very big in her career. It has caught UFC President Dana White’s attention.

Dana has allowed the youngster to avail the facilities of the UFC Performance Institute. Dana White is always very supportive of young and ambitious fighters. So it is no surprise that he is going out of his way to help Bella, for whom, the sky is the limit.

“[Dana] just gives me opportunities. There’s not many 18-year-old girls calling Dana and being like, ‘Dana I just won my fourth state title’… For him to be proud of me, he’s like another dad. That’s how he treats me and how I treat him. I couldn’t be more grateful.” (h/t via UFC)

As the fans may know, Frank Mir has been inactive inside an MMA cage since 2019. Mir, who has a career record of 19-13, has had his career cut drastically short because of a motorcycle accident in 2004. Because of it, he was stripped of his UFC heavyweight belt. However, he recently stated that he wants his last official MMA fight to be on the same card as his daughter.

“Next year I’m going to go and fight again because actually I want to fight once on the same card with Bella, as my last fight… She can headline the card, I can open it.” (h/t via MMA Fighting)

Although he has not had an MMA fight in the last 3 years, Mir made his boxing debut against Steve Cunningham on April 17th, 2021. He lost the fight via unanimous decision after six rounds. After such a disappointing result, he would love to go out with a win in the same event as his daughter.