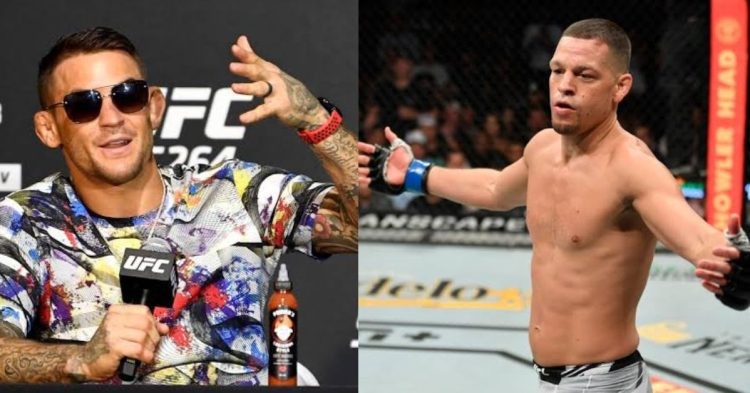 After the completion of yesterday’s UFC Long Island event, Dana White sat down for a press conference and answered questions regarding the future of Nate Diaz. The UFC President claimed that The Stockton Slugger received several offers for a fight.

He also fired back at Nate Diaz’s remarks about the UFC keeping him a hostage. Soon after the post-event press conference, Diaz offered his response to Dana White’s comments on Twitter.

The Stockton Slugger alleged that the UFC President has not offered him a single bout. Moreover, Nate also questioned Dana about Francis’ current injury situation and ended his tweet by allowing him to leave the company.

Dana said Francis Ngannou was injured and couldn’t fight right now
Idk why he was so confused in interview.
And in the last 9 months I been offered 0 fights and I asked for 5 legitimate opponents ..
Thanks u for the kind words can I go now 👊🏼

It is quite unclear who is telling the truth in this situation. But one thing is for sure the relationship between Nate Diaz and UFC is turning sour every day and it not looking good for the promotion.

Surprisingly, Dustin Poirier who was rumoured to fight Nate Diaz earlier this year has offered his support to the lightweight rival after his ongoing issues with the UFC. Despite their bitter banter on Twitter, The Diamond has backed Diaz. He went on Twitter and replied to an Ariel Helwani tweet by posting a “Free Nathan Diaz” hashtag.

Many fans also followed Poirier’s movement by supporting Nate by posting this tweet. It is quite unfortunate to see Nate Diaz suffer like this. However, he is not the only fighter who has faced such a situation.

Former UFC star Cris Cyborg had also undergone turmoil during her final days in the promotion and similarly, current heavyweight champion Francis Ngannou is also unhappy with the terms of his contract. Do let us know in the comments section what you think about the current contract situation of Nate Diaz.