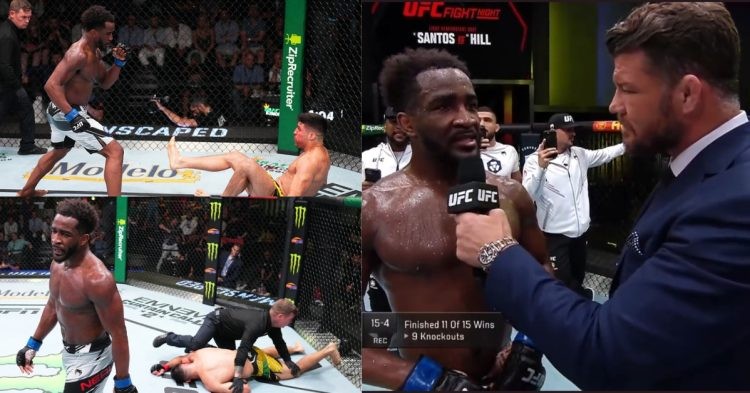 Vicente Luque stepped inside the octagon to take on Geoff Neal in a three-round bout that took place in the co-main event of UFC Fight Night: Santos vs Hill. Leading into this bout, Luque suffered a lopsided loss to Belal Muhammad that marked an end to his remarkable four-fight winning streak.

It is needless to say that The Silent Assassin was looking to get back to winning ways as he wants to reclaim his spot in the top five rankings of the welterweight division. On the other hand, his opponent, Geoff Neall snapped his two-fight losing skid after edging past Santiago Ponzinibbia via split decision in his last fight.

Geoff Neal is currently ranked thirteenth in the division. Therefore this matchup was undoubtedly the most crucial fight of Handz of Steel’s UFC career as he had the opportunity to make a big leap with a win over the #6 contender Luque in the 170-pound rankings.

Subsequently, fans were expecting a brutal war and this matchup turned out to be just as advertised with both welterweights engaging in many violent striking exchanges. However, it was Handz of Steel who dominated the fight and knocked Luque out in the third round.

Geoff Neal became the first fighter to knockout Vicente Luque as the Handz of Steel put the Silent Assasin to sleep in the third round at UFC Fight Night. He started strongly and landed great combinations. Neal landed a whopping fifty significant strikes and was very dominant in the first round.

He caught Luque with his left hand on several occasions and had him on the skates. But The Silent Assassin somehow survived and made a big turnaround in the second round. He found his rhythm and mixed it up with leg kicks and combinations of punches. Luque backed Neal to the corner and outstrike him in the second round to equalise the fight.

Although Geoff Neall showed everyone why he’s so deadly as he picked apart Vicente with his boxing. Handz of Steel let his hands go in the third round and landed a big left hand to stun Luque and thereafter, there was no stopping him as he bombarded him with uppercuts and finished Vicente Luque via knockout.

After beating Vicente Luque, Michael Bisping asked Geoff Neal who he would like to face next in the post fight interview. To which Handz of Steel expressed his desire to face The Silent Assassin’s teammate Gilbert Burns.

🎤 @HandzOfSteelMMA pulled no punches in this call out! #UFCVegas59 pic.twitter.com/MIkHLR0f1f

“Honestly I’ve been looking at Gilbert Burns. I want him next. He’s coming off an L. It’s somebody up there. I mean Luque is six I beat six. Who’s in front of me? Gilbert is doing nothing. I already fought Belal, I beat Belal.”

Geoff Neal made a statement and will definitely climb up the welterweight rankings. With Khamzat Chimaev booked for a fight, it makes sense for the UFC to schedule a fight between Burns and Neal.