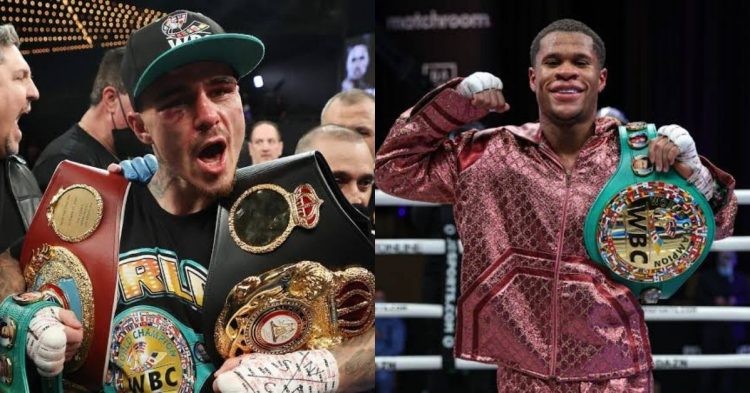 George Kambosos Jr and Devin Haney, two of the best lightweights in the world will step inside the squared ring for a face-off in one of the most anticipated fights in boxing.

Both the boxers will battle it out inside the boxing ring in a unification bout for WBA, IBF, WBO, WBC, and The Ring lightweight titles.

The fight will take place this weekend, June 5th, inside Marvel Stadium in Melbourne, Australia.

George Kambosos made his pro debut in 2013 at the age of 19. The lightweight is a two-time Australian National Championship silver medalist, WBA-PABA, and WBA Oceania lightweight champion.

Kambosos scored a win over Mickey Bey in 2019, which was a major turn in his career by staking his claim as a potential contender for the lightweight title.

He defeated Lee Selby, the following year and booked his shot for the IBF belt, which was then held by the unified world lightweight champion Teofimo Lopez.

Needless to say, in another very highly anticipated match, Kambosos went against Teofimo Lopez last year in November 2021, where he defeated the champion via split decision and became the WBA, IBF, WBO, and The Ring lightweight champions.

A post shared by The World Boxing Association (@wbaboxingofficial)

Kambosos’ opponent Devin Haney is not far behind in terms of accomplishments inside the ring. The young champion turned pro in 2015 after winning seven National titles.

His scores only got bigger when he won the interim WBC lightweight title in 2019, against Antonio Moran and was soon promoted to become the champion, after which Haney has defended the belt four times.

He had his last fight against Joseph Diaz, last year in December. Haney won the fight by unanimous decision.

Let’s have a look at the differences between the two rivals.

Height and Reach difference between George Kambosos and Devin Haney

Weight-wise, Haney has the upper hand weighing 135lbs over Kambosos’ 130lbs, currently. It is subjected to fluctuation in between the lightweight mark.

Both Haney and Kambosos have the orthodox stance with a reach of 180 cm and 173cm, respectively.

Haney has a higher Knockout percentage of 55% compared to Kambosos’ 50%.

Looking at the stats looks like Haney could have the grip in the ring but the unified champion Kambosos isn’t someone to be taken lightly for he has paved his way by defeating many great champions and it will be a mistake on Haney’s part to overlook the surging Auustralian.