George Kambosos Jr vs Teofimo Lopez Fight Purse: How Much Did Kambosos and Lopez Earn for Their Undisputed Title Clash

by Tepi Jini
in Boxing
0 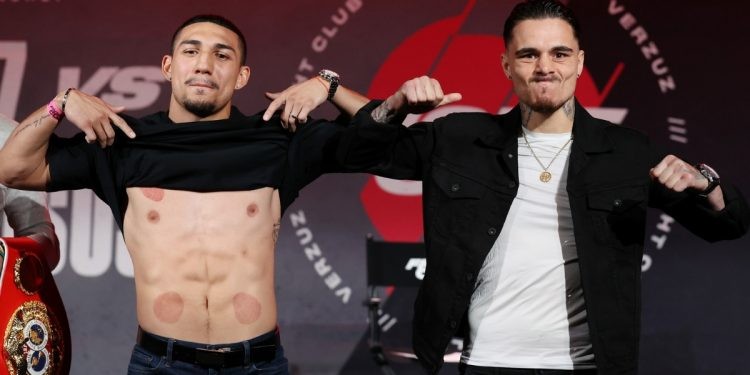 In a very highly anticipated match, Kambosos went against Teofimo Lopez last year in November 2021, he defeated the champion via split decision and became the WBA, IBF, WBO, and The Ring lightweight champions.

George Kambosos Jr (20-0-0), made his pro debut in 2013 at the age of 19. The lightweight is a two-time Australian National Championship silver medalist, WBA-PABA, and WBA Oceania lightweight champion.

Kambosos’ win over Mickey Bey in 2019 was a major turn in his career by staking his claim as a potential contender for the lightweight title.

He defeated Lee Selby, the following year and booked his shot for the IBF belt, which was then held by the unified world lightweight champion Teofimo Lopez.

A post shared by The World Boxing Association (@wbaboxingofficial)

Teofimo Lopez is a former unified lightweight world champion, having held the IBF title from 2019 to November 2021, and the WBA (Super), WBO, and The Ring magazine titles from October 2020 until November 2021. As an amateur, he represented Honduras at the 2016 Summer Olympics.

With Teofimo being the bigger name at the time, Kambosos, shook the world walking out a champion from Madison Square Garden’s Hulu Theater with three of the four recognized world championships at lightweight.

Teófimo López vs. George Kambosos Jr. was a true war, but the Australian came out on top in an incredible upset 🔥#LópezKambososJr | @autozone pic.twitter.com/Kka8UXXc8T

Previously, Top Rank offered Lopez $1.25 million to face Kambosos Jr. But with López and Top Rank not reaching an agreement, the fight went to a purse bid.

Triller won the purse bid for $6 million, to stage the fight between López and Kambosos Jr.

The fight was initially booked for June, before Lopez tested positive for COVID-19, due to which the bout was pushed to August. The match-up finally took place in November of 2021.

Because of the repeated rescheduling of the match, the right to promote the fight went to the next highest bidder, Matchroom.

According to the sources, Teofimo Lopez received the amount of $2.27 million ($AUD3.18 million) from Matchroom while George Kambosos Jr earned around $1.22 million (AUD$1.71 million).

However, these aren’t the confirmed numbers as the final payout amounts after the PPV cuts and sponsorships were not officially disclosed.

Devin Haney vs Joseph Diaz Fight Purse: How Much Did Both the Boxers Earn for Their Boxing Showdown