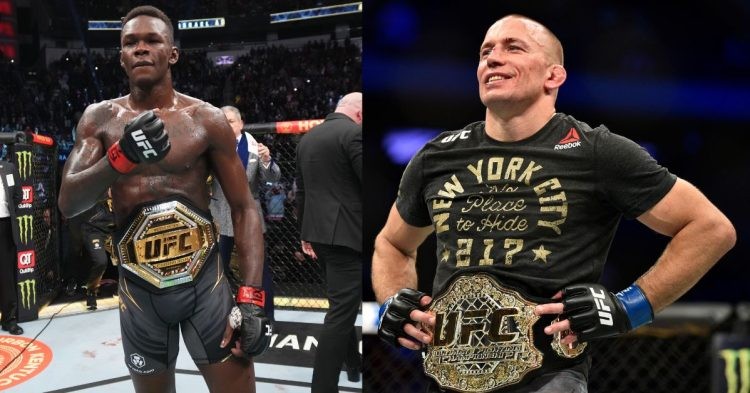 One of the greatest Mixed Martial Artists of all time, George St. Pierre has recently gotten close to the current UFC Middleweight Champion Israel Adesanya. The legend has spoken out giving various advices to the young Champion. He was also spotted hanging out with the New Zealand native.

The last Style Bender spoke out about the experience of being mentored by one of the greatest of all time, Georges St Pierre and stated:

“I’m getting to a stage where I’m always gonna be great. George is my dawg, man. When me and him talk…we got drunk and we did some sh*t I won’t talk about on camera but we went deep and it was insightful”

‘Rush’ has been mentoring Izzy on how to be a good champion. Of course, St. Pierre would know what he’s talking about considering he is one of the greatest to have ever graced the octagon. And even out of the octagon, St. Pierre has always conducted himself with the highest order. That’s one of the reasons he’s become an example of what a perfect champion is supposed to be like. George, in an interview, had some advice for Adesanya. He stated:

“It’s good that you use it as a fuel to motivate you because it gives you more energy to prove them wrong,” St-Pierre said in the video. But don’t pass the line of doing this. Heavy is the crown, my friend. Nobody can understand, but it gets worse and it adds more weight to your shoulders every fight. Every fight is bigger and bigger and the criticism is worse and the expectations are more and more and more… keep the fire. Because this adventure can change you from the inside out and it changes the brain, your center of comments, you don’t that to change, especially not right now.”

Recently, Israel Adesanya has been in a row over his “boring” fights. Which basically means, him not trying to engage with his opponents enough to entertain the fans.

This Mayweather-like phenomena happens when a fighter is so good defensively that he can win comfortably by defending and countering alone. A huge drawback of this is that it sucks the excitement out of fights. It leaves no room for something unexpected to happen.

George St. Pierre’s wrestling was superior to most welterweights and that is one of the reasons he suffered the same problem, the problem being him not being exciting enough. According to legendary trainer Cus D’Amato, a professional fighter should know how to win while entertaining the fans. Adesanya has been falling to do so in his recent fights.

His next fight though, promises a lot of action as he collides with his former rival and the only man to knock him out, Alex ‘Poatan’ Pereira who has made a transition from kickboxing to MMA a year ago. We’ll get to see if Adesanya gains back the respect he earned by putting out exciting knockouts over Robert Whittaker and Paulo Costa.