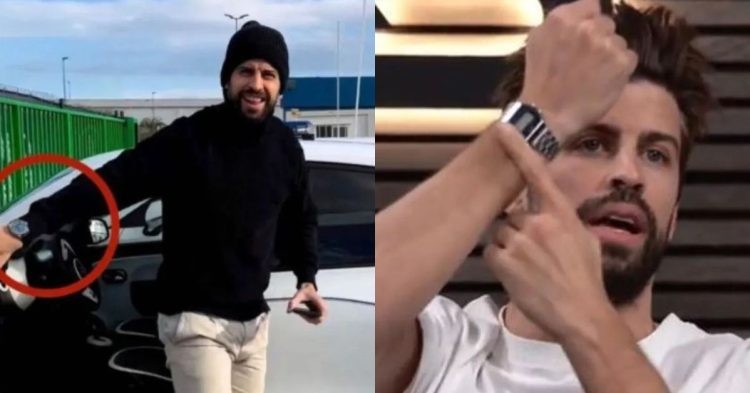 Spanish journalist Jordi Martin has struck again against Gerard Pique as he revealed that Pique was not wearing a Casio watch after all the publicity he did. Martin uploaded a post of Pique wearing a watch of another brand captioned, “And the Casio?” after Pique assured that Casio is now an ally.

Martin closely followed the relationship between Pique and Shakira. He had predicted at the very beginning that this was not a relationship that would last because Pique would feel inferior. He had said in one of his posts, “Many people support you Gerard Piqué, but I still think what I predicted 12 years ago. That this relationship was too big for you, that you had an inferiority complex with Shakira.”

Marti accused Pique of many things in his post including paying for Clara’s surgery and getting her a job at his company. Marti said, “You [Pique] felt tiny next to her. You needed a 23-year-old girl to laugh at you. You are immature.”

“Shakira didn’t need anyone to pay for her cosmetic touch-ups. I think that a few days ago you paid for Clara’s lips, right? You had to hire Clara in your company by hand and give her a position that not even her #Kosmosoffidical colleagues themselves understand.”

It becomes Shakira’s 39th top 10 hit (the third-most overall, trailing only Enrique Iglesias and Ricky Martin) and extends her record for the woman with the most songs in the top 10. pic.twitter.com/4kZMDthPea

The Spanish journalist was also recently involved in breaking the news about Pique cheating on Clara Chia Marti. He revealed that Pique was involved with a young lawyer named Julia Puig. Because of this, Clara has not been living with Pique. Otherwise, it was believed that Clara moved out because she did not want the media attention that was directed to her due to Shakira’s record-breaking song ‘BZRP Music Session #53‘.

In Shakira’s collab with Argentine rapper Bizarrap, she sang words that were clearly directed to Pique and Clara. She made many references to the toxic end of her relationship with Pique. She sang, “I’m worth two 22’s. You traded a Ferrari for a Twingo. You traded a Rolex for a Casio.”

In the public eye, Pique has been trying to see the funny side of those accusations. He was seen driving a Renault Twingo car because of those accusations. Before doing that, he also confirmed an agreement with Casio. In his live streaming on Twitch with Sergio Aguero, he said, “we have reached an agreement with Casio”. The Spaniard pointed to his watch and said, “this watch is for life.”

Pique and Shakira have been making each other’s life difficult since they decided to separate in the summer of 2022. This is just another chapter in a long list of things they have done after the breakup.