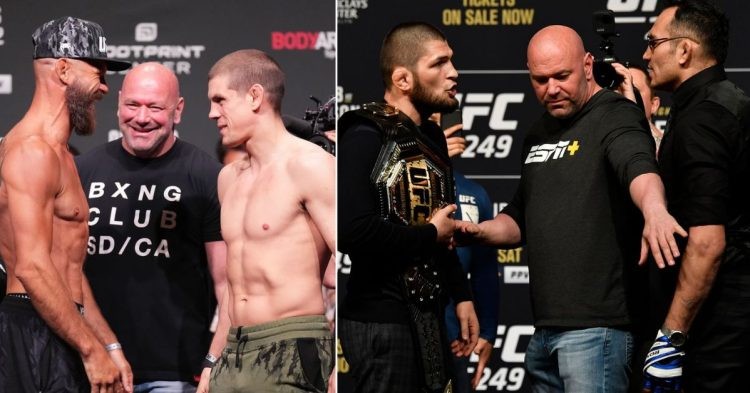 Cerrone vs Lauzon and Tony vs Khabib (Credit: UFC)

Donald Cerrone vs Joe Lauzon was canceled for the second time in a row. Scheduled to share the UFC Octagon at UFC Austin, Cerrone vs Lauzon was pulled off after Lauzon suffered a knee injury.

Earlier, Lauzon had missed the ceremonial weigh-ins owing to “cramps” as described by the UFC. While the fight was still on at the time, it was later canceled with Lauzon taking to Instagram to give more updates about his decision to opt out of the fight.

Lauzon stated that he was not able to stand or put any weight on his leg after it locked up while wearing socks after the official weigh-ins. This was the second time that the fight was pulled off, with Donald Cerrone pulling out of the fight the first time around. The UFC veteran suffered from food poisoning days before their scheduled match-up.

Both the fighter were earlier scheduled to take on each other at UFC 276. After the cancellation at UFC Austin, questions of whether or not the fight will be booked for the third time took steam, and unfortunately for the fans, UFC is not looking to book the fight again.

After back-to-back cancellations for one reason or the other, UFC President Dana White sounded off on the idea of booking the fight for the third time.

“Probably not. That thing is getting like Tony and Khabib. No! I will not book that fight again.” White confirmed during the post-fight press conference of UFC Austin.

White compared the match-up between Cerrone and Lauzon to Tony vs Khabib, which as you might be aware was a fight that could never take place. The hugely anticipated lightweight bout between Tony and Khabib was canceled as many as four times, and with Khabib hanging up his gloves, it’s safe to say that we might never get to see it again.

As for Donald Cerrone, he has already stated that he will retire after his 50th professional fight, so it’s safe to say that there is still a bleak possibility we might get to see this match-up.

White also gave an update as to when we could see Donald Cerrone back inside the Octagon. “He just cut that weight yesterday, we wanted to see if he wanted to fight in July. He doesn’t want to cut weight again, so he won’t fight in July.”

Donald Cerrone will go down in history as one of the greatest mixed martial artists of all time. It will be interesting to see who will be his last set of opponents as he continues on his last few years of mixed martial arts inside the UFC Octagon.