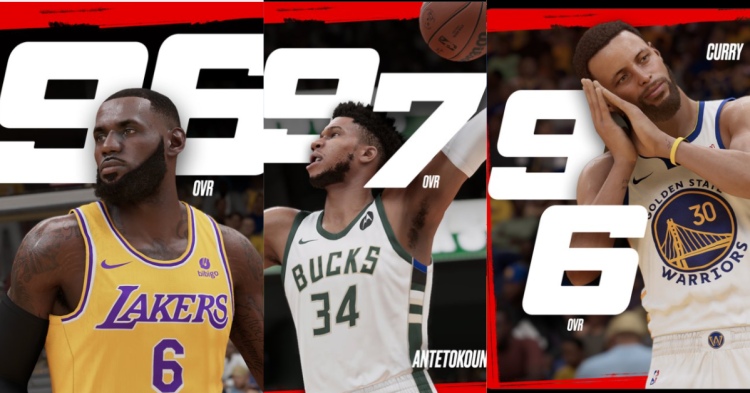 The crucial player ratings are, as is customary, one of the most talked-about aspects of the upcoming NBA 2K23  from developer Visual Concepts and 2K Sports. Prior to the game’s release on Friday, the ratings team laid out the red carpet. Fans debated the situation as predicted right away, and well-known figures like Kevin Durant made public comments.

The player with the highest rating will not surprise us at all. It is none other than Milwaukee Bucks’ finest Giannis Antetokounmpo with a rating of 97. It seems like the Greek Freek has touched another peak after winning the NBA title a few years ago. Giannis just topped LA Lakers star LeBron James as the game’s top-rated forward. Golden State Warriors guard Stephen Curry  is leading all guards with a comparable 96.

Though Joel Embiid of the Philadelphia 76ers is theoretically right there with the same rating, the two-time MVP Nikola Jokic of the Denver Nuggets tops the list among centers at 96.

Kevin Durant checked in at a 96 as well, though he didn’t appear so happy about it.

It’s only fair to provide an explanation for this list after disclosing the Top 10 player rankings in NBA 2k23. We’ll do that with our slight assessments on why each player earned their position on the list.

The Greek Freak has greatly enhanced his physicality, athleticism, and versatility and transformed into an unbeatable force after winning a Championship with the Bucks in 2021. Appearing to be the game’s biggest cheat code.

The Golden State Warriors are champions once more and the guy at the helm of it all, is Stephen Curry. If we’re being honest, this will be the least surprising of the lot. Steph won his 4th NBA title this year, together with his first-ever Finals MVP. The awards and hearts he won this year surely earns him a well-deserved spot on here.

Even though Durant has had his fair share of injury setbacks and a difficult time with the Brooklyn Nets, his offensive threat is still unmatched. Kevin Durant is perhaps the hardest player to defend in the league, and he keeps doing it every season.

NBA 2K must show the Jokic the respect he merits after the he won the MVP Award in back-to-back seasons. Because of the dominant, dependable worker Jokic was last season, the Denver Nuggets were able to remain relevant.

He is one of the finest centers in the NBA and considering how long he was in the running for MVP, you might even argue that he ought to have taken home the award. He’s most likely the NBA’s top defensive and offensive center.

Since being selected, the Slovenian international player has completely dominated the league and wreaked havoc. Standing 6’7″, Luka Doncic is a powerful point guard with good handling who has evolved into an exceptional playmaker.

Kawhi Leonard is only 30 years old and in prime position to compete for a championship when healthy. Overr the years, Kawhi has developed his game and has become more of a scorer. No longer just a defender who can score here and there, five of Leonard’s last six seasons have been 21+ point per game seasons. He’s increased his assists average in each of those seasons, showing the ability to take on heavy workloads on both ends.

For the first time in more than ten years, the Boston Celtics returned to the Finals, and Jayson Tatum was a major factor in that. Even against a difficult Warriors team, his abilities and versatility on both sides of the ball have significantly increased.

Last year, Ja Morant had a truly exceptional season. In fact, he won the Most Improved Player of the Year award as a result. His skill set has significantly improved, and last season, he shot a career-high from 3-point range (34.4%). Morant is a shining star with uncanny athletic ability who is deserving of his 93.