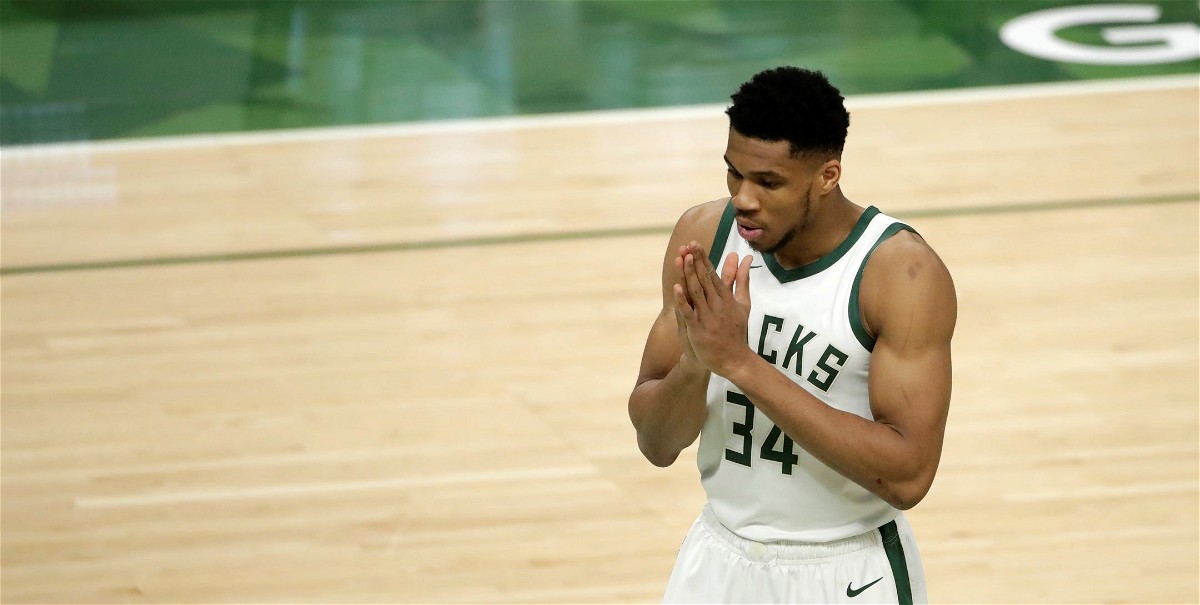 Giannis Antetokounmpo was a young Greek  Baller who came to the United States with no money and a dream. Now he is one of the scariest power forwards in the NBA. Giannis Antetokounmpo is a two time NBA MVP. He has now added an NBA Finals MVP and an NBA Championship to his long list of awards and honors.

Giannis and the Milwaukee Bucks had a wonderful playoff run. The NBA Finals saw the Bucks overcome a 2-0 deficit against the Phoenix Suns. They sealed the deal in six games with four consecutive wins and Giannis Antetokounmpo was the star performer for the Milwaukee Bucks.

Game 1 and 2 of the NBA Finals 2021 saw the Phoenix Suns completely dominate the Milwaukee Bucks. Giannis Antetokounmpo was completely helpless on the court. Jrue Holiday and Khris Middleton could not perform at their best in the first two games.

The Phoenix Suns had a star duo, Devin Booker and Chris Paul who wrecked the Milwaukee Bucks defense. Giannis played 35 minutes in game one and he put up 20 points, 4 assists, and 17 rebounds. In game 2, the Greek Freak put up 42 points, 4 assists, and 12 rebounds. Even a 40 point game was not enough for Giannis to seal game 2 against the Suns. At this point, the Phoenix Suns were in the driving seat.

However Giannis is not programed to give up easily. The Milwaukee Bucks came back stronger in game 3. the Greek Freak broke through the Suns defense and put up a show for the fans. He played 38 minutes an put up 41 points, 6 assists and 13 rebounds. The series was now standing at 2-1, the win gave the Milwaukee Bucks a confidence boost but the job was not done yet.

Giannis Antetokounmpo Pulls of a Stellar Block in Game 4

The Milaukee Bucks had to win game 4 to even the playing field and tie the series. The game was close throughout. The suns would score and the Bucks would answer.

The turning point of the game came when DeAndre Ayton was about to perform an alley-hoop dunk on Giannis Antetokoumpo and the Greek Freak pulled off an incredible clutch block giving fans the 2016 LeBron James blocked vibe. The Milwaukee Bucks won game 4 and tied the series 2-2. Giannis Antetokounmpo put up 26 points, 3 steals, 2 blocks, 8 assists an 14 rebounds in game 4.

After delivering a clutch block in game 4 of the NBA Finals, Giannis came back with the mindset of taking the lead in the NBA Finals series against the Suns. Game 5 took place in the Valley which means the Bucks were on enemy ground. Giannis as usual received taunts for his free throw shooting throughout the game. The two-time MVP did not let anything distract him from his goal of winning game 5.

The turning point came when Jrue Holiday stole the ball right out of Devin Booker’s hands and threw it up for Giannis to alley-hoop. Giannis Antetokounmpo flew high and slammed it down hard, shutting down the Suns’ arena and giving Milwaukee a 3-2 lead in the series. He put 32 points with 9 rebounds and 6 assists in game 5. The Milwaukee Bucks were one win away from winning their first-ever title.

Game 6 of the NBA Finals 2021 took place on the Bucks turf. It was a do-or-die situation for the Phoenix Suns and The Milwaukee Bucks wanted to win game six in front of their home crowd. After three straight wins in the series, Giannis and co put up one of the best closeout games and sealed the deal against the Phoenix Suns.

Giannis has his name etched in the record books forever. The Greek freak had a historic closeout game. He put up a show for the fans with 50 points, 14 rebounds, 5 blocks, and 2 assists. He became one of the first players to complete the Mamba Challenge. Giannis can now proudly hold his trophy and say he is truly the MVP.

Giannis Antetokounmpo was emotional after winning the NBA Finals and was already talking about coming back next season to win it all over again. Will the Bucks go back to back? only time will tell. Right now the party has begun in Deer city. Giannis finished the 2020-2021 postseason with 28.1 points, 11.0 rebounds, and 5.9 assists per game.