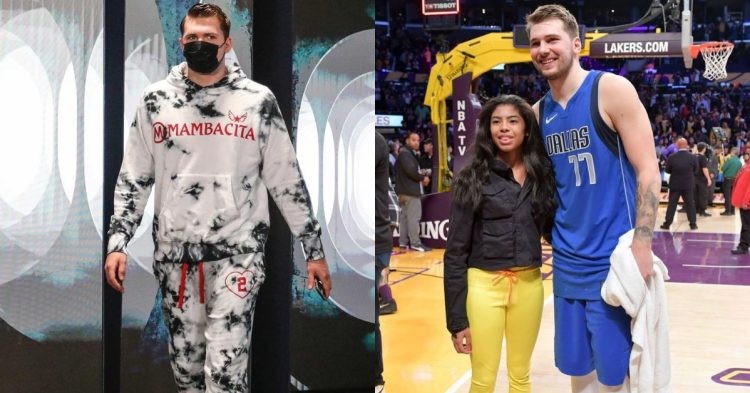 The world stopped when Kobe Bryant passed away in a tragic helicopter crash in January 2020. What made the incident worse was when his daughter, Gianna, aka, Gigi, passed away in the same crash as well. She was just 13 years old at the time. Gigi had her a bright career ahead, in basketball, just like her legendary father. However, fate took a drastic turn when their helicopter crashed in the hills in the Calablasas.

Gigi’s autopsy report shows that she had to go through a horrible time before her death. It was one that should not have happened to anyone, regardless of any reason. Together with the rest of the NBA world, Luka Doncic was also one of the players to pay tribute to Kobe and Gigi. He wrote their names on his shoes, together with the names of the rest of the victims.

The last time Kobe came to the Staples Center with his daughter, was when the Mavs played against the Lakers. That was the time when Luka posed for an image with her as well. It is no secret that Kobe aimed to teach Gigi the tricks of the trade as well. And the best part was she was intrigued to learn more about the nuances of the sport that her father was known for.

Lakers VP Rob Pelinka has revealed in the past Gigi wanted to study Luka’s play style. The Slovenian must have known that she was a fan, especially after how well they communicated during Gigi’s outing at the game that night. After her death, Luka paid tribute to her by wearing a ‘Mambacita’ sweatshirt after one of the games. That day, he said, “It’s great to represent.”

Luka Doncic, who was one of Gigi Bryant’s favorite players and met Kobe and her at the Staples Center last season, wore a Mambacita sweatsuit tonight. “It’s great to represent,” he said. pic.twitter.com/kRyIb1wH5Z

Gigi got the name ‘Mambacita’ after she displayed her talents on the court. It was inspired by the name for her father, the Black Mamba. Now, her mother, Vanessa Bryant, heads the clothing line for the brand.

It is mentioned that the sale proceeds go to the development of the Mamba and Mambacita Sports Foundation. The purpose of the charity was to help athletes in need, with astonishing talent, like Gigi Bryant, to reach fulfil their dreams and goals.