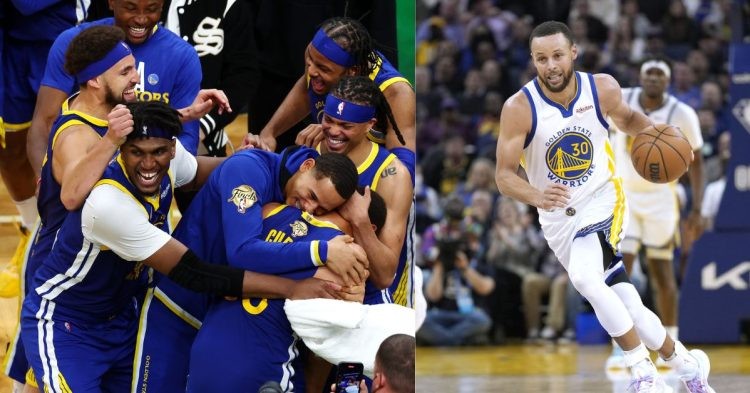 Stephen Curry and the Golden State Warriors are the defending champions heading into the 2022-23 NBA season. We all remember their deep run in the playoffs which ended with the Warriors winning the NBA title. There were several players who were responsible for the team’s success last year.

From Draymond Green to Andrew Wiggins to Jordan Poole, every player did his part. However, a lot of drama has surrounded the team heading into this season. A lot of it has to do with the Jordan Poole and Draymond Green incident. Moreover, the team is also deep into the luxury tax and is paying its players a lot of money.

With that being said, there is no denying that the Warriors are looking to defend their title this season. Therefore, their coach Steve Kerr will be deciding the best starting lineup. We should wonder about the changes that are to be expected this season.

While the Warriors are the defending champions, they have no intention of giving that title away anytime soon. They managed to resign pivotal stars from their championship run this NBA offseason. Both Andrew Wiggins and Jordan Poole got fresh contracts with GSW. However, they did not retain some players like Gary Payton II, Otto Porter Jr, and Juan Tuscando Anderson.

These players certainly created an identity for the Warriors last season. Especially on the defensive end. Be that as it may, GSW has decided it has more than enough talent to cultivate. We are quick to forget that they did not have their young center James Wiseman last season due to injuries. Here is what their lineup could look like with Wiseman on the court.

It is unfair to count Draymond out. However, we can’t ignore Wiseman’s growth. He has already shown flashes of dominance in the NBA preseason. He scored 20 points and 9 rebounds as the Warriors defeated the Washington Wizards at the NBA Japan games. Moreover, he is only 21 years old and still has a long way to go before fully developing. Jonathan Kuminga is another young player GSW retained this season. He is athletic and defensive-minded. Therefore, Kuminga fits in well with the Warriors system.

In conclusion, the Warriors have a deep roster for the 2022-2023 NBA season. They will look to play Stephen Curry, Klay Thompson, Jordan Poole, and Andrew Wiggins at the same time. If they do so, we might end up seeing James Wiseman get big minutes to bring the size and defense that the team will need.
Tags: 2022-2023 NBA seasonGolden State WarriorsNBA
Previous Post