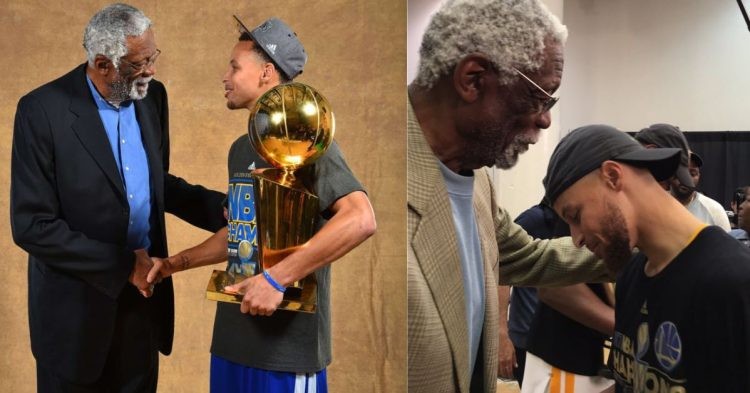 The world has come to a stop since basketball legend Bill Russell passes away. The 88-year-old was one of the most historical legends of our game. In fact, he was the player with the most championships won. With 11, Russell was the NBA’s legend. Many have mourned Bill’s loss, including Stephen Curry.

Curry joined the Golden State Warriors in 2009. After winning his first title with them, the American took a picture with Bill Russell.

After Russell’s demise, Stephen Curry posted on his Instagram. He said, “Trailblazer. Icon. Greatest champ in basketball. Made the world on and off the court a better place. Thank you and rest easy! 11”

Stephen Curry had a special relationship with Bill Russell

Just like Steph said, Bill was the one to make the place better for everyone else around him. With the civil rights movement, Bill was able to help those that surrounded him. Russell was part of a team that never backed down from fighting for what was right, and that’s what he was known in the NBA for.

Apart from being a champion, Bill also taught young players to keep going as he did back in the day. Before their passing, Bill told Kobe Bryant and mentored him on leadership before Kobe retired. He then revealed that Bill’s advice helped him to win two titles with the Lakers after Shaq had left.

We don’t know if he gave any advice like that to Steph. But he has had an exceptional year and won his ever The Bill Russell NBA Finals MVP this year. The trophy named after the great himself was an honor that fell upon Steph after his electrifying performances for GSW in the last season.

The former Boston Celtics great also enjoyed a special relationship with Steph. In a tweet, he said, “it has been fun watching you progress year after year. Remember I only give the guys I like a hard time.”

Happy Birthday @StephenCurry30 It has been fun watching you progress year after year. Remember I only give the guys I really like a hard time. #Respect @NBA @warriors pic.twitter.com/HDpI9XQE6s

Bill Russell admitting that he likes Steph is a huge thing for us fans and Steph himself. I mean if we’re being honest, with what Steph has achieved, he can impress anyone.