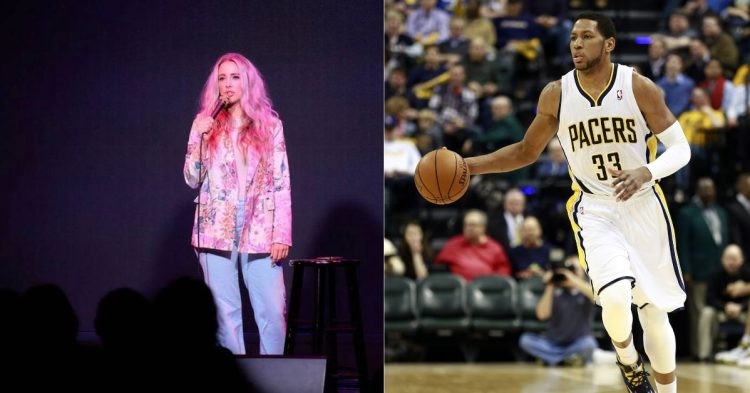 Former Indiana Pacers star Danny Granger has received a lot of attention from the NBA community in recent times. Thanks to stand up comedian Brittany Schmitt‘s recent show, fans now believe that Granger had a wild past. For context, Schmitt revealed that one of her ex-hookups who was also an ex-NBA player, called her to tell her that he was now a Jehovah’s witness.

The entire revelation had caused backlash from fans towards Granger for “gloating” about the fact that he was now a Jehovah’s witness. In addition to that, he also told Brittany to repent for the sins she has committed. Now, what Schmitt has done in the past is not known to the world. However, judging from her expletive jokes during the show, it seems like she had a bizarre experience with Granger, and her cousin?

Does Danny Granger really have a cousin named Keith?

It seems like Danny’s cousin Keith has gone viral for all the unusual reasons in recent times. One fan tweeted, “Danny Granger appears to be really close to his cousin Keith.” Now, does “Keith” exist or was that just a joke by Schmitt to make the show more entertaining?

Danny Granger appears to be really close to his cousin Keith 🤣 https://t.co/Krtjdixoqj

Although there isn’t any information online if Granger has a cousin under that name, but he does not have friends on social media platforms to go by Keith. However, it may also suggest that Schmitt used a different name instead to hide Granger’s cousin’s identity.

Many have had a go at Granger for being “sick”, “nasty” or even “gross as f*ck” after Schmitt revealed the alleged experiences with him. Now, despite no official confirmation on it being him, it seems like fans are believing it to be DG, since he was the only light-skinned one apart from Darren Collison and Dewayne Dedmon.

Moreover, fans have criticized Granger for calling his ex and telling her to repent for the sins she committed with himself.

Lmao I instantly thought Darren collision cuz I knew he was since UCLA. When she said
Lightskin I looked it up and it’s Danny Granger 😂 nasty Mf

One user claims that they thought it would be Darren Collison, the former NBA player who almost joined the Golden State Warriors. However, since the entire world is pointing its fingers at Granger only, now the internet seems to believe so too.

Danny granger side piece doing decent as a comedian no bapski

Another fan has also mentioned Schmitt being Granger’s side piece. They wrote, “Danny granger side piece doing decent as a comedian no bapski.” There are claims of the former player having an affair with Brittany but there is no confirmation on that either. Granger married his wife, Dionna Kann Granger in 2009.