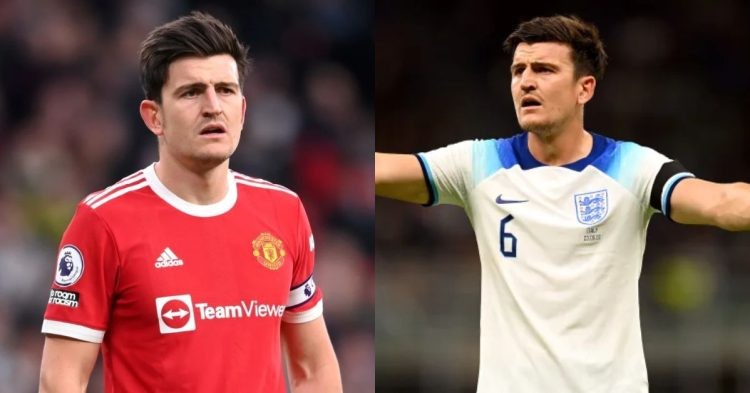 England lost to Italy in the UEFA Nations League on Friday, relegating them to League B of the competition. England and Manchester United captain, Harry Maguire has defended his place in the England team. He referenced his Euros performance from over a year ago to defend himself. Maguire suggested the criticism he receives from Manchester United supporters is not fair. He feels they are just for ‘clicks’ on social media.

England have had abysmal performances leading up to this World Cup. Their captain coming out with such a defiant interview always does more harm than good. This is not the first time the ex-Leicester center-back has made tone-deaf comments either.

Maguire’s performances in a back 5 for England have always been solid. It was his 2018 world cup performances that saw him become one of the most sought-after center-backs in the Premier League. Unfortunately for him, his form domestically since then has plummeted. Despite being the first name on the team sheet under Solskjær, he finds himself on the bench for Erik ten Hag.

When asked about his situation, Maguire told talkSPORT: “I am all good, ready to play, I feel fit and fresh. On my form, I don’t know what has been said, I don’t really read about it.”

He spoke about the wide criticism he has received on his club performances. “I am not concentrating on anybody else and what people are saying. I came off the back of three positive games with England in the summer, and a good pre-season, I felt really good.

Harry Maguire says the stories about him are for clicks 🗣️ pic.twitter.com/8LkzuvhAeA

“Obviously, the manager decided to leave me out for a game, and the team have been winning since. I am working hard on the training pitch to make sure I am ready for when my opportunity comes. That is all what I can do to try and help the team. I am not concentrating on anybody else and what people are saying, I think if people can make a story about me, I am Manchester United captain, it is going to make big news,” Maguire added.

Despite playing regularly for Manchester United in recent times, Harry Maguire is the first name on Gareth Southgate’s team sheet. He looks set to be on his way to Qatar as England captain.

Using his Euros performance from over a year ago to defend his World Cup position is very bizarre. His tone-deaf comments and blame-shifting are bound to get him criticism, even if people were to ignore his on-field performance.

According to Mark Ogden of ESPN, a source close to Harry Maguire has made comments defending the England captain.

“Harry needs pace around him, but he hasn’t had that,” a source close to Maguire told ESPN. “If you put Ruben Dias in the United defence and Harry in the City back-four, Dias would struggle and Harry would thrive. Harry hasn’t had a good 12 months, but he hasn’t been helped by those around him — coaches or players — so it’s inevitable that his confidence and form have suffered.”

The blame-shifting continued with David de Gea receiving the blame for being more comfortable speaking Spanish. Ogden said that De Gea’s reluctance to defend further away from the goal and poor communication have had an even worse impact on Maguire. He says the arrival of Lisandro Martinez has improved the situation since they can now communicate in Spanish.

Defending Harry Maguire is only making him worse! He is full denial about his form & protecting him and calling the rightful criticism of him abuse will hurt England & Man Utd!

Dias is one of the best centre-backs in the league. He plays alongside John Stones, who isn’t much faster than Varane or Lindelof. The pace argument, therefore, really does not make much sense.

David de Gea has played in England since 2011. Playing with the likes of Rio Ferdinand and Chris Smalling, De Gea surely wouldn’t have had communication problems. There might be some debate as to whether he deserves to stay at Old Trafford, but this blame game helps nobody. It worsens Maguire’s image for the fans.

Maguire hasn’t denied any of these comments. In fact, his talkSPORT comments have made the situation even worse. The entire football world will be seeing if Maguire can turn his form around, but his comments are earning absolutely no sympathy from Manchester United.