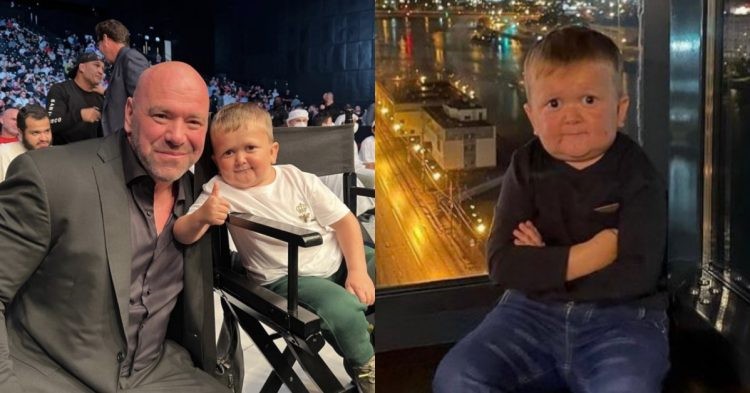 It looks like Hasbulla Magomedov is not quite the people pleaser that the fans thought he would be. There was a report from Bloody Elbow, which suggested a recently concluded tour left the fans unsatisfied with the popular social media sensation.

One can not underestimate how much of a fan favourite he really is! Hasbulla has almost 750K followers on Twitter and 2.1 million more on his Instagram account. It just proves how in-demand the influencer really is. He was even seen hanging out with basketball legend Shaq. Hence, fans in Australia were really excited about the prospect of getting to meet him.

How Girls see the difference between 5’11 and 6’0 pic.twitter.com/OAixUgBKFw

The Hour Group announced previously that Hasbulla would be visiting Australia and doing a ‘Meet and Greet’ on 4 different occasions, 29th August, 30th August, 31st August and 1st September. While the first two events took place in Sydney and the last two were in Melbourne. The tickets were listed for $250 to $299. So it was certainly not a cheap event to attend.

However, the report suggests that a lot of promises were not kept by the organizers. While one of his scheduled events in Sydney was cancelled, Hasbulla apparently did not engage with the fans properly. He is known to punch and kick his fans in an adorable way. As a result, the ticket holders had hoped for the same. But it seems like, there was none of that.

One fan was extremely frustrated with the way the event went. They said, “It was horrible, like I don’t expect to pay $250 and then get nothing out of it, I could have just edited a photo with Hasbulla just sitting there with me and that wouldn’t have cost me money.”

The report also suggests that the promised “A life-size cardboard cutout of Hasbulla” was also not given to the fans. Furthermore, Hasbulla did not take any photos with his female fans due to his “personal and cultural beliefs.” So it does sound like the event did not make the kind of impression that the fans hoped for.

UFC has signed Hasbulla Magomedov on a 5-year contract

This report surfaces on the heels of big news regarding Hasbulla and UFC. It is confirmed that the 19-year-old has agreed to be a part of the UFC on a 5-year contract. But, it does not mean that the fans will get to see him fight inside the Octagon. Instead, he will act more as a brand ambassador for the company.

The report also stated that the amount of money in the contract is bigger than the salary some fighters are making in the UFC.

Hasbulla has signed a 5 year contract with the UFC pic.twitter.com/eg6l3UEb3y

So the contract is certainly a lucrative one. However, the incident mentioned previously was not a part of his UFC deal. It remains to be seen how the company reacts to the claims of Hasbulla ripping off the fans down under.

Hasbulla suffers from a hormone deficiency which has stunted his growth. He came to notice because of his feud with Abdu Rozik. The two had heated back-and-forth exchanges on social media. They even got into it during a UFC event. Although there were rumours of a fight between Hasbulla and Rozik, Hasbulla’s good friend, Khabib Nurmagomedov put an end to it.