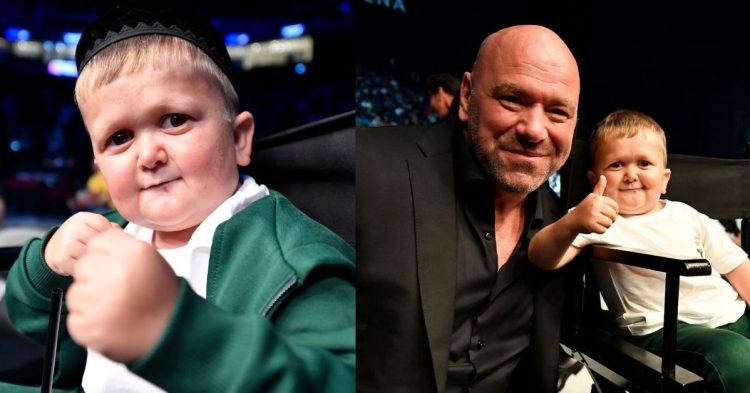 Hasbulla Magomedov also known as ‘Mini’ Khabib has become a massive internet sensation in the past one year. Hasbulla garnered millions of views with his funny MMA spoof videos and his equation with MMA pros and celebrities from around the world. He also delivered an amusing pre-fight build-up with Abdu Rozik that got him an insane amount of fame and publicity.

Hasbulla, who is believed to have a form of dwarfism has now signed a five-year contract with the UFC. Talking to Barstool Sports, Dana White confirmed the signing of the 19-year-old social media influencer, White said “Yes, we did sign Hasbulla, and what he’s going to end up doing remains to be seen.”

It seems pretty obvious that he is not going to step inside the cage and fight for real. According to various sources, Mini Khabib will serve as an ambassador for the UFC and will be doing media and attending various events for the organization.

Hasbulla previously attended UFC 267 event in Abu Dhabi to support Islam Makhachev for his fight against Dan Hooker, and reportedly will also be present for his fight for the vacant lightweight title against Charles Oliveira at UFC 280 at the same venue. Hasbulla’s presence proved to be a good luck charm for Makhachev as he had a dominating outing against Hooker, who he submitted inside a minute. After the victory, Hasbulla even joined Makhachev and his team for celebrations.

Magomedov has a massive fan following with over 3.4 million followers on Instagram and many more across various other social media platforms. As of now, Hasbulla’s net worth is estimated to be around $200,000. Apart from his love for MMA, Hasbulla could also be seen enjoying luxurious car rides, he has been spotted on top of various expensive cars like Mercedes, BMW and Lexus.

How much Hasbulla will earn with his UFC contract

Multiple reports suggest that Hasbulla will be getting paid handsomely for his role with the UFC and that amount may even be better than some fighters on the UFC roaster.  Hasbulla’s PR team in a statement said “We will not talk about the amounts in detail, but there they are such that many fighters do not get that much. Hasbulla signed a 5-year contract with UFC! No fights yet.” After this deal with the UFC, Hasbulla’s earnings are expected to rise drastically.

Dana White has been certainly attempting to gain more fans and grow UFC on a global scale. And signing internet sensation Hasbulla might be one step closer to achieving that goal.