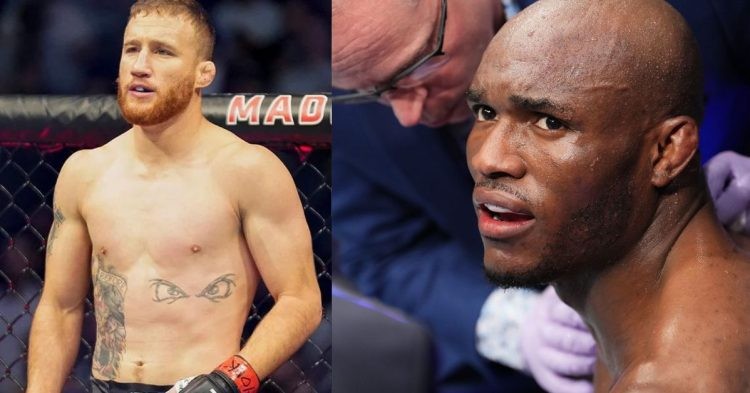 In one of the Greatest comeback victories in UFC history, Leon ‘Rocky’ Edwards snatched the title from the dominant welterweight champion Kamaru Usman at UFC 278.

With dominant victories over Jorge Masvidal(twice), Colby Covington(twice) and Gilbert Burns, Usman was on the road to being considered the Greatest welterweight of all time, but just when it looked like he is going to earn an easy sixth title defense Leon Edwards shocked the world with a brilliant head-kick knockout with a minute left in the fight.

Top lightweight contender and Usman’s close teammate Justin Gaethje has shared his opinion on Usman’s future. He said, “He’s the best in the world and again, we both understand it’s not the beginning,” Gaethje told Drake Riggs. “It’s not even the middle anymore. It’s not the end, but we’re on the downhill of our careers, there’s no doubt about that. I don’t want to fight until I’m 40, he doesn’t want to fight until he’s 40, and I don’t want him to fight ‘til he’s 40. He’s in a great spot. He’s gonna come back, maybe fight this guy in London, he’s better than him and he should win. The reason why we’re all such fans of this sport is because of the unpredictability at any given moment.”

What’s ahead for Kamaru Usman

An Immediate rematch. Considering what Usman has achieved in the welterweight division it would be highly unfair if he doesn’t get an instant rematch against ‘Rocky’ Edwards. According to multiple sources, UFC is keen to have a trilogy between Usman and Edwards earlier next year at the iconic Wembley stadium in London. Although there are endless possibilities in the welterweight division with the number two ranked welterweight fighter, Colby Covington ready and eager to go. Edwards long time rival Jorge Masvidal is also trying his best to break into the title picture.

Prior to Usman’s fight against Edwards at UFC 278, he had openly expressed his willingness to fight at the light heavyweight division, skipping middleweight due to his friendship with current middleweight champ Israel Adesanya.. After losing his title, that plan seems to be in the backseat. With the UFC interested in having Usman vs Edwards III, ‘Rocky’ is the only guy Usman should be focus on, as he himself said after the fight “Good job. ‘Rocky’. Good job. I’ll see you soon.”