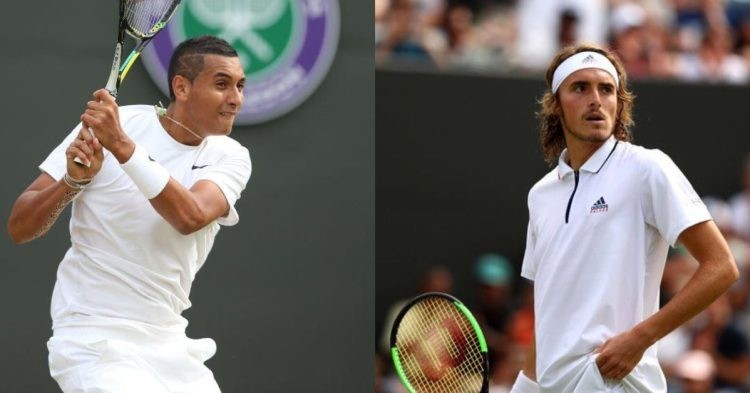 Stefanos Tsitsipas saw his Wimbledon campaign come to an end as he lost to Nick Kyrgios in the third round in four sets. The match was high on energy and drama as one would expect from a Kyrgios match. At one point, Tsitsipas hit the ball into the stands and was lucky enough to get away with it.

However, Kyrgios created a whole scene and argued with the umpire for not taking strict action against Tsitsipas. Even after the incident, Kyrgios was constantly arguing or complaining. After the match got over, Tsitsipas made his feeling known without any ambiguity.

Stefanos Tsitsipas calling Nick Kyrgios a bully. “It’s constant bullying. That’s what he does. He bullies his opponents. He probably was a bully at school” https://t.co/5H7bimsC2h pic.twitter.com/xBJUQBs6Fp

The Greek star went on to call his opponent a bully. Furthermore, he said, “Yeah, it’s constant bullying, that’s what he does. He bullies opponents. He was probably a bully at school himself. I don’t like bullies.”

The two played a high voltage match that went to four sets. Kyrgios looked in fine touch while Tsitsipas looked a little rusty. At the end of the match, Kyrgios was through to the next round with a score of 6-7, 6-4, 6-3, 7-6.

Stefanos Tsitsipas says Nick Kyrgios has a very evil side

It looks like Kyrgios got on the nerves of Tsitsipas and that probably affected his game. Tsitsipas also called out the evil side of Kyrgios where he plays psychological games to win matches.

Moreover, he said, “I don’t like people that put other people down. He has a very evil side to him, which if it’s exposed, it can really do a lot of harm and bad to the people around him.”

After the match got over, Kyrgios was told about Tsitsipas’s ‘bully’ remark. Kyrgios replied, “I don’t know what to say. I’m not sure how I bullied him. He was the one hitting balls at me, he was the one that hit a spectator.”