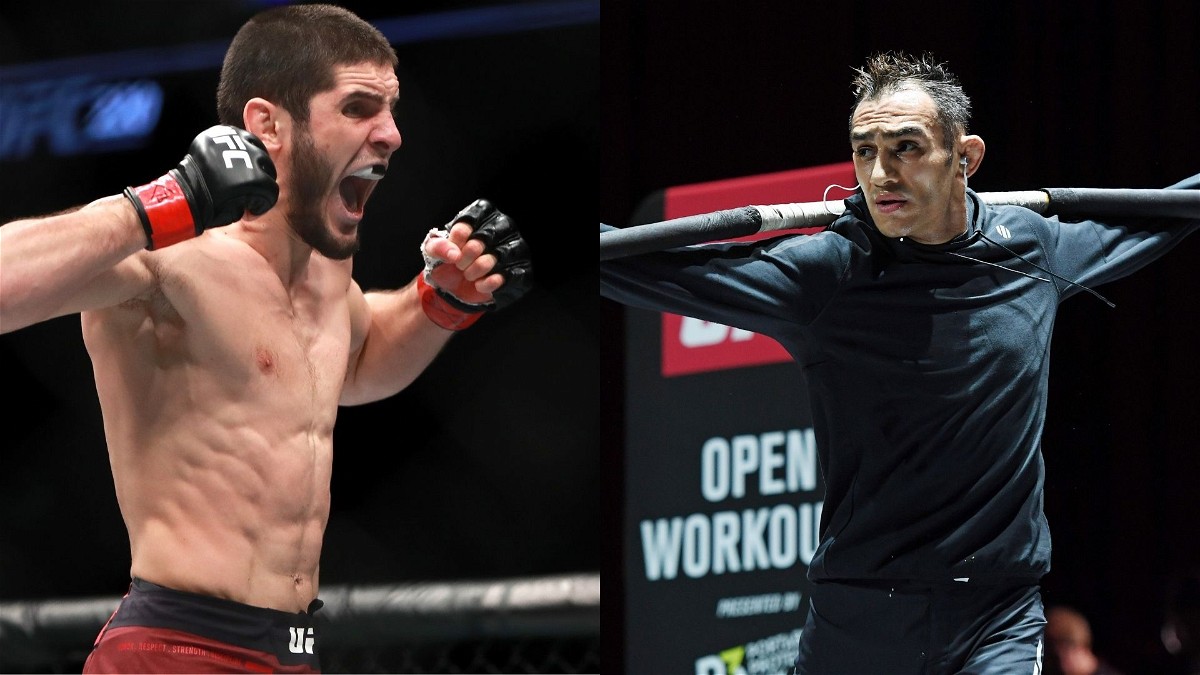 Islam Makhachev will face Thiago Moises in his first main event fight at UFC Fight Night this weekend in Vegas. Furthermore, this will be the first time that the lightweight contender will contest in a five-round bout. As a result, fans will be excited to see the Russian battle on 17th July.

As we lead to the build-up of this fight, Islam Makhachev sits down to have a conversation with Brett Okamoto of Espn MMA. However, from the looks of the conversation, one can assume that Makhachev is already looking past his opponent Thiago Moises. This is because he is talking about the list of opponents he wants to face after this fight.

While speaking to Brett Okamoto, Islam Makhachev expresses his desire to face Tony Ferguson in the future. Moreover, he speaks about how he is the perfect opponent for El Cucuy. “I just want to help (Tony Ferguson) retire. He lost his last three fights. He has to retire because all these guys from the top 10, all his last three opponents, beat him very bad. I think he’s old now. He has to retire, but I can help him.”

It is needless to say that Islam Makhachev is very confident about securing a win against Thiago Moises this weekend. Moreover, he will try to make a statement in his first-ever main event fight in UFC in Vegas.

Is Islam Makhachev a bad matchup for Tony Ferguson?

This is not the first time that Islam Makhachev has expressed his wish to fight Tony Ferguson. He has called out El Cucuy previously in March and April this year. Islam’s manager Ali Abdelaziz had offered Tony Ferguson a fight against his client after Ferguson suffered a disappointing loss against Beneil Dariush at UFC 262.

However, fighters in the top 10 including Tony seem to duck Islam Makhachev because they are wary of the threat that the Russian possesses in the octagon. Despite losing three fights on the trot, El Cucuy is a big name in the promotion. This is the main reason why Makhachev wants to fight Tony and use him as a stepping stone in UFC.

By judging Tony Ferguson’s recent performances, a fight against Islam Makhachev will be a very bad matchup for him. This is because the former interim lightweight champion has been taken down six times in his last two fights. To make matters worse, his opponents Charles Oliveira and Beneil Dariush controlled him on the ground for 11 minutes:36 seconds and 12 minutes:15 seconds respectively.

Therefore Islam Makhachev who is well known for his grappling skills in Mixed Martial Arts will create a similar impact if he faces Tony Ferguson in the future. As a result, it will a very one-sided result and a fourth consecutive loss will tarnish the legacy of Tony Ferguson. Hence UFC should avoid booking a fight between Makhachev and Ferguson.

Also read: Here’s Everything You Need to Know About Islam Makhachev’s Life in Dagestan, Childhood, and Family