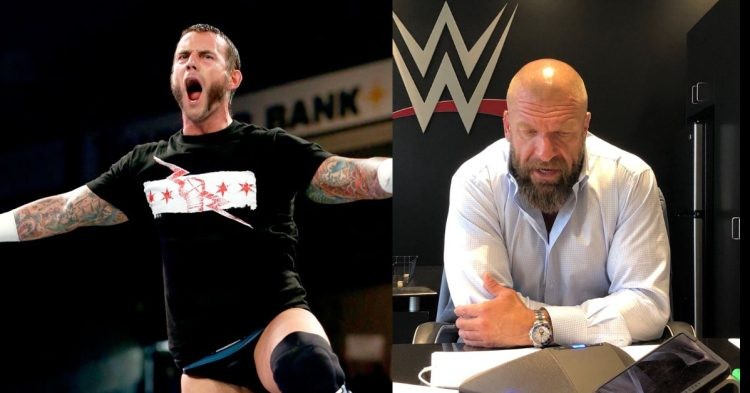 While working together in WWE, Triple H and CM Punk were never on the same page. Triple H has spoken out about “The Best in the World” and has always been quite open about it.

Triple H appeared as a guest on the second-ever live episode of Steve Austin’s “Stone Cold Podcast” on the WWE Network. “The Rattlesnake,” asked HHH about his previous feuds with CM Punk. Triple H admitted to having communication problems with Punk, noting that because he prefers to keep to himself, it was difficult to get a read on him and grasp when and what concerned him during his tenure in the company.

Triple H said, “He’s a weird cat. Like, I don’t mean that as a knock but I mean that as a, he’s hard to get to know he’s, he doesn’t talk. He doesn’t communicate well, I would hear from everybody in my role now as you know, talent relations and all that I would hear to everybody that ‘oh my god, he’s livid today he’s quitting he’s this he’s that’ and I’d go to him and say what’s going on and I’d get ‘it’s fine.”

The entire world is aware of their feud; CM Punk has publicly stated that Triple H buried his push in WWE and hence maintains a vendetta against him. Punk is a tough guy to work with, as evidenced by the mayhem he created at AEW.

Triple H is notorious for abusing his backstage power to bury superstars he disliked personally or had a thing for. Since becoming Chief Content Officer after Vince’s retirement, Triple H has developed a more mature and business-oriented perspective. As a result, there has been speculation that Punk will return to WWE at some point.

Why did CM Punk leave WWE?

CM Punk left WWE in 2014 because he was dissatisfied with his booking and after being misled and possibly dying from misdiagnosed injury by WWE.

CM Punk departed the WWE in 2014 for a number of reasons, including burnout and a lack of drive. He also mentioned feeling creatively restricted and dealing with physical issues, among a variety of other factors, which he shared on a podcast after he left the company. Punk left WWE the day after the January Royal Rumble pay-per-view.

According to Media Referee, Punk chose to quit WWE because of his health. Punk sustained multiple injuries throughout the years, preventing him from performing at his highest potential. At the same time, the star felt the obligation to provide the spectators with a great fight to see.

Without a question, CM Punk is one of the top wrestlers in the world. However, the story that emerged following his AEW Locker room brawl has hurt his fans. If you can’t respect the people you work with, no matter how good you are or how well you perform in the ring, you don’t deserve to be there.