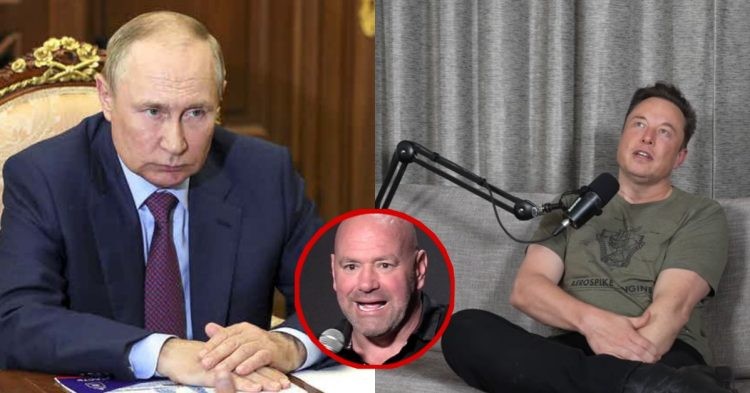 One of the wealthiest men in the world wants to fight one of the most powerful men in the world! You would be forgiven for thinking it was a comedy movie’s plot. However, it is very real and is almost on the brink of happening. The men in question are Tesla CEO Elon Musk and the President of Russia, Vladimir Putin.

In March of this year, Elon took to Twitter and challenged Putin for a one-on-one fight. The Russia-Ukraine conflict was at its peak at the time and Musk wanted to settle the situation by challenging Putin to a singles combat challenge. However, there was no reply from the Russian President regarding the matter.

The topic went cold for a few months as there was no development from either side. However, it came up once more during Elon’s recent appearance on the Full Send podcast hosted by the Nelk Boys. After Elon’s wish to challenge Putin in an MMA ruleset match, the Nelk Boys suggested UFC President Dana White might be interested in making the fight happen. Elon Musk even has his finishing move ready for a MMA fight against Putin.

“I challenged him to single combat. MMA-style. Listen, it’ll be a pay-per-view. It’ll be an interesting question because he’s good at martial arts and he’s pretty buff. You’ve seen those pictures of him on a horse… I do have a bit of a weight advantage… I think I’m 30% bigger than him. I’m going to use a move called the walrus, where I just lie on you. You can’t get away.” (via lefthookclub)

Will Dana White entertain the possibility of Elon Musk vs Vladimir Putin taking place in UFC?

At the moment, two of the biggest Pay Per Views (PPV) in history are Floyd Mayweather vs Manny Pacquiao and Floyd Mayweather vs Conor McGregor. The events have sold 4.6 and 4.3 million PPVs respectively. However, a fight between Vladimir Putin and Elon Musk will outgross any event in the history of PPVs. Who would not want to see two of the most famous men in humanity’s history taking on each other?

Unfortunately, it is only a daydream. An actual bout between the two will end horribly. Elon is 51 years of age whereas Putin is 69. Hence, no sanctioning body will let the bout go ahead in their right mind. For argument’s sake, even if the fight gets the clearance, it will be a logistic nightmare actually to make the fight happen.

Dana White has put on the above-mentioned Mayweather vs McGregor fight. He also signed former WWE and current AEW wrestler CM Punk to fight in the UFC. Although the gamble on Conor was a PPV success, the Punk experiment was an utter failure for the company. Even the James Tony vs Randy Couture fight ended in a disaster.

Hence, it is safe to say that the possibility of seeing Dana attempting to make the fight happen is less than zero.

Do you actually want to see the fight happen? If you do, then is there a possibility of Dana White actually trying to make Elon Musk and Vladimir Putin fight? Let us know in the comments below.