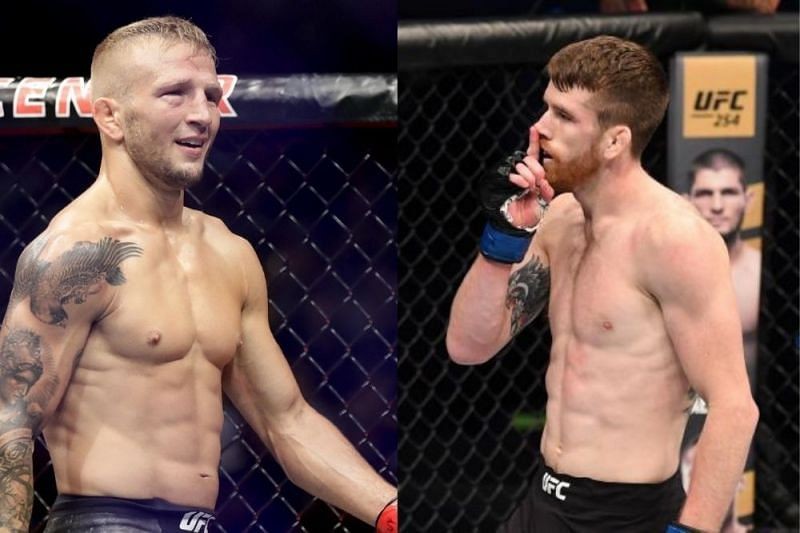 TJ Dillashaw takes on one of the best bantamweights in the world right now, Cory Sandhagen in the main event of UFC vegas 32. This is not going to be an easy task for Dillashaw coming off a 2-year suspension.

Besides that stylistically, Sandhagen is a nightmare matchup for anyone in the bantamweight division. So it’s needless to say that the pressure will be on Dillashaw this Saturday night.

However, the former bantamweight champion seems confident ahead of his return as he believes he will get the job done against Sandhagen.

It is to be noted that Sandhagen and Dillashaw used to be training partners before Sandhagen came to UFC. Dillashaw has even mentioned on multiple occasions that Sandhagen used to beat him during training sessions. However, Dillashaw believes that the history between them will favor him inside the octagon.

“I have done very well against the guys I have trained with. I am a very good guy at game planning. I know what a guy’s weaknesses are. But it all matters when the lights are turned on. And you can talk about practice all you want, but we are not here to talk about practice. We are here to do it in front of everyone.” TJ Dillashaw explained.

Also Read: TJ Dillashaw’s walkout songs: which song does Dillashaw walk out to in UFC?

TJ Dillashaw details what makes Cory Sandhagen a force to be reckoned with in the bantamweight division. He believes that Sandhagen is a tricky opponent but he is also confident that he will put on a beating on Sandhagen when the Octagon door closes. TJ stated:

“Cory is a great athlete. When I even trained with him I think he was a basketball player before he started becoming a martial artist. So I was impressed with him being able to scramble and do the things he has been able to do. He has great footwork, great distance control. But he is still the same fighter I trained with. He is still the same guy that I know I can come out there and put a beating on him. So I am excited for Saturday.”

What do you think about this exciting matchup? Can TJ Dillashaw make a successful comeback?