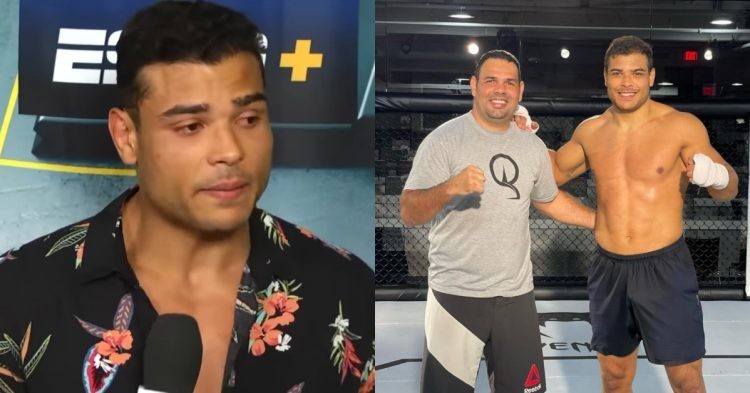 Paulo Costa vs Luke Rockhold goes down this weekend at UFC 278. During the fight week, fighters are usually very focused and intense. However, Costa just showed a different side of his personality during the media day for the PPV. He gave a shout-out to his friend and former boxer Kelson Pinto.

The no. 6 ranked fighter spoke to ESPN journalist Brett Okamoto and became emotional all of a sudden while talking about Pinto. With teary eyes, Costa detailed the importance of Kelson in his life and called him very special.

“I found some very good people. I deserve a lot of credit to Kelson Pinto. That guy is amazing. I even get emotional when I talk about him… Kelson Pinto, he make a lot of difference on my life… He’s a former boxer. He fought Cotto, twice; Miguel Cotto. He won one. He lost the rest.” (h/t via SportsKeeda)

As Paulo Costa himself revealed, Kelson Pinto is a former boxer. He made his boxing debut in December of 2000 against Francisco Antonio Martinez. However, his boxing career was not a very long one. He only fought for 6 years and the biggest name on his resume is Miguel Cotto. He has a record of 24 wins and 2 losses. Costa’s only losses are against Cotto and Vince Philips.

His last boxing match was in August of 2006, against Adriano De Souza. Although he lost to Cotto in the pros, Pinto defeated Cotto during his run as an amateur fighter. He also won the gold medal at Pan American Games in 1999. The event took place in Winnipeg and Pinto competed in the light welterweight division. However, he corners MMA fighters these days.

He was even pictured beside Octagon, cornering fighters. Pinto’s association with Paulo Costa is very significant. Although Costa is a black belt in Brazilian Jiu-Jitsu (BJJ), he does not prefer to take the fight to the ground. Instead, he uses brute power to put his opponents away. During his initial run, Costa was more focused on landing a big strike in the hope of securing a KO.

However, in recent times, Costa has streamlined his offence in such a way that allows him to use striking in a more potent way. Costa’s defence has also improved significantly since making his UFC debut and the improvement can be attributed to Kelson Pinto. So seeing Costa get emotional while speaking of Pinto is not surprising as he is grateful to the former boxer for making him better.