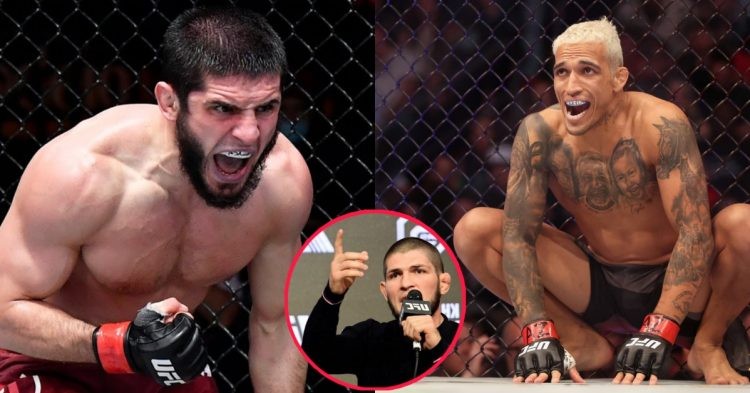 Charles Oliveira will be taking on Islam Makhachev later this weekend. The highly anticipated UFC lightweight championship bout will go down at the Etihad Arena in Abu Dhabi at UFC 280.

The Brazilian is coming off an impressive first round win over Justin Gaethje. However, it is worth noting that he lost his title after missing the weight. On the flipside, his opponent, Islam Makhachev was last seen inside the octagon in February this year against Bobby Green. The Dagestani won the bout via a first round TKO.

Going into the fight, the rivalry between Charles Oliveira and Islam Makhachev has been heating up. In fact, Khabib Nurmagomedov, who will be on Makhachev’s corner has also shown his fair share of disregard for the Brazilian.

The Dagestani has constantly trashed Charles Oliveira’s ground game suggesting that he doesn’t stand a chance against Makhachev. Moreover, he also suggested that the Brazilian might not even show up for the fight.

While Charles Oliveira hasn’t directly responded to Khabib Nurmagomedov’s constant show of disrespect, it will be interesting to see if the Brazilian greets the Dagestani inside the octagon or not.

It is worth noting that Oliveira is rather respectful towards his opponent’s cornermen and always greets them before the start of the fight. However, we might see a different act this time around because of Khabib Numragomedov’s constant disregard.

The comment section of the post saw fans share their thoughts on the matter. While many fans suggest that Oliveira’s sportsmanship will stand out, a few speculated otherwise.

Take a look at some of the fan reactions below:

“100%. He respects khabib but doesn’t fear him. Plus khabib isn’t doing anything besides coaching.”

“No he is gonna fortnite “L” dance on them”

“Sure. His sportsmanship is bigger than any trash talk Khabib and Islam could ever throw at him. He is illuminated, don’t you know?” 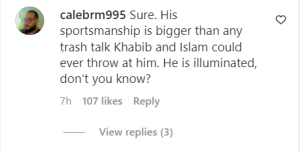 “Ofcourse he is, why wouldnt he not its not like they have a rivalry its called respect “

It’s safe to say that fans are excited to see what happens when Charles Oliveira encounters Khabib Nurmagomedov inside the octagon. However, the Brazilian himself won’t be too bothered by this. He will certainly be focused on getting his UFC title back after losing it on the scales. That said, it will be interesting to see how the lightweight championship match turns out later this weekend.