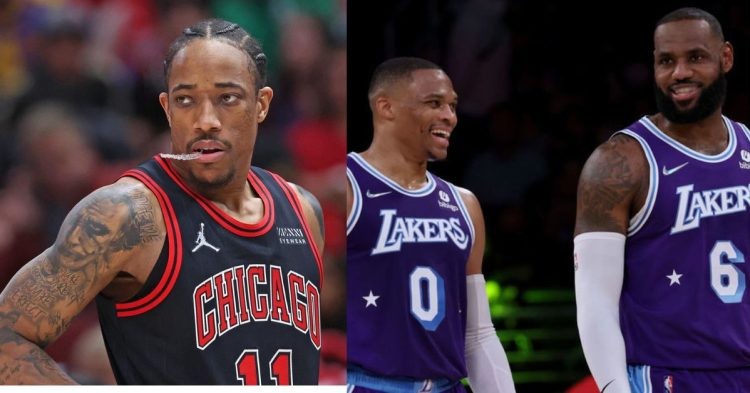 LeBron James and the Los Angeles Lakers won the NBA title in 2020. However. they have seen nothing but failure since then. They were eliminated next season by the Phoenix Suns in the first round of the playoffs. Thus, the Lakers made the decision to acquire Russell Westbrook from the Washington Wizards. Not many NBA fans are aware that DeMar DeRozan could have also become a Laker.

We know this didn’t happen. DeRozan was traded to the Chicago Bulls to play alongside Lonzo Ball and Zach Lavine instead. The Chicago star recently spoke out on how he thought he was going to become a Laker but it never came to fruition.

Very few people can argue that the Lakers would have been worse with DeRozan instead of Westbrook. Be that as it may, it is important to understand what he said in order for us to draw conclusions of our own.

Most of us remember how close Kyle Lowry and DeMar DeRozan were during their time together on the Toronto Raptors. Therefore, it isn’t a surprise to find out that they are good friends off the court and stay in contact.

When DeRozan was a free agent, he wanted to become a Laker. This was also because he is originally from Los Angeles and felt a sense of connection towards the city. In fact, this was not a one-sided assumption. The Lakers had clearly shown interest in DeMar and he even thought it was a done deal.

” I’m sleeping one morning in Mexico, I get a call from Kyle Lowry, and he said they just made the trade for Russ what was going on? I thought the deal was done for you to go to the Lakers.”

Demar went on to explain how he actually found out he was passed up and the deal wasn’t actually going down, “ And I’m like, I was confused. I’m looking at my phone, damn that did happen. Well, I guess that’s out the window… Like I was sold on that. Done deal. I didn’t even entertain anything else as I was letting this situation work itself out. So when I see the trade happen, I knew there was no way for me to go to the Lakers at this point.”

After hearing this version of the story, one cannot help but feel a little bad for DeRozan. Thankfully, he seems to have made the right decision as the Chicago Bulls made the playoffs last year. LeBron James, Russell Westbrook, Anthony Davis, and the Lakers did not.